Quito is the capital of Ecuador and the province of Pichincha. The full name is San Francisco de Quito. It is the country’s political and cultural center and, with 1,619,432 residents, is the country’s second largest city after Guayaquil. The metro area of Quito Distrito Metropolitano, which also includes surrounding municipalities, has a population of 2,289,191.

The city is located in the Andes Mountains at an altitude of 2800 meters, at the foot of Pichincha volcano, 20 kilometers south of the equator. Quito is divided into 32 parroquias (parish), and is led by a city council with a directly elected mayor at the head.

Quito’s historic center is designated by UNESCO as part of the world’s cultural heritage. Together with Krakow in Poland, the city ​​was the first to receive this award in 1978.

Quito is located in a valley surrounded by high mountains. The city is at the foot of the still active volcano Pichincha. There are a significant number of parks in Quito. In the city center we find 670 acres of La Carolina, El Ejido and Alameda. The area where the former airport was located was transformed into a park area in 2014.

Several of Ecuador’s most prestigious universities are located in Quito.

There are more than 30 museums within the urban area. Among the most visited are the Museo del Banco Central with the country’s largest collection of archaeological finds, arts and crafts from pre-European cultures. It also has a large art collection from the colonial era. The city museum, Museo de la ciudad, is located in the old hospital, which is one of the city’s oldest buildings (1536). Capilla del Hombre is a large museum and art project erected by the country’s most accomplished artist in modern times, Oswaldo Guayasamin (1919-1999).

The Natural History Museum and Botanical Garden are located in the Carolina Park. Quito Zoo is located a few miles north of the city center in the municipality of Guayllabamba.

The population has been steadily increasing since Quito was officially founded in 1534. Urbanization of the country and the efficiency of agriculture have led to a steady influx of immigrants.

Ethnicity according to the 2010 census:

Most residents live in service professions. Tourism is a growing source of income. There is also some industry in the production of food, textiles and auto parts.

The new Mariscal Sucre International Airport, inaugurated in 2013, is located in Tabalela 18 kilometers east of Quito. It replaced the old airport with the same name that was in the middle of the city. With its location and short runway, it was considered a security risk.

The largest bus terminal Quitumbe is located in the very south of the city. Here there are national and international bus departures south, east and west. Departures north are from the La Ofelia terminal in the north.

Within the city limits, the main means of transport is the trolley bus network. Three parallel routes, El Trole, La Ecovia and El Metro, cross the Quito from north to south. It was established in 1995. However, there are problems in meeting the transport needs, especially during rush hour.

A Metro network, Metro de Quito, is under construction and was scheduled for completion in 2016. Due to budget overruns and funding problems, the opening is postponed until July 2019. When completed, it will cover a 22 kilometer stretch, from the Quitumbe bus terminal in south to Labrador in the northern part of the city.

Urban Quito is located on a valley plateau that extends 50 kilometers from south to north. Its width is 8 kilometers from east to west. The historic center just north of the Panecillo Hill constitutes a natural distinction between the southern and northern parts of the city.

The historic center is around the open spaces of Plaza de Independencia and Plaza de San Francisco. At Plaza de Independencia lies the Palacio de Carondelet presidential palace and the large cathedral La Catedral (begun 1562). The San Francisco Church (begun in 1550) is located on the square by the same name. In the historical center are also the churches of San Agustin and La Compañia (commenced in 1605). The latter is known for its interior where the ornaments are covered with gold.

North of the historic center we find the Alameda and El Ejido parks, which are also classic urban scenes. Then comes the Mariscal area with a concentration of hotels and restaurants. Here is the so-called “Zona pink” where Quito’s nightlife flourishes. The area around Carolina Park is referred to as “the modern Quito.” The banks and the large national and international companies are located here. Large apartment complexes have also been erected in the higher price ranges. The boroughs further north mainly consist of residential buildings.

The southern part has been affected by immigration from the countryside and the development is less planned. The lack of maintenance of buildings is more conspicuous than in the north.

In the fifteenth century, the area was incorporated into the expanding Incaricet. It had its origin in Cusco, Peru, and in a few hundred years had undergone an area that surpassed the Roman Empire at its greatest. Quito became the northern capital of the kingdom. The last Inca emperor Atahualpa was born here.

The official foundation of the city is believed to have taken place on December 6, 1534 by the conquistador Sebastian de Benalcazar. All the buildings were then burnt to the ground by Inca Chief Rumiñahui so that the Spaniards would not take advantage of it.

During the colonial era, Quito was the seat of Audiencia y Presidencia de Quito. From here, they managed an area 50 percent larger than today’s Ecuador.

The struggle for independence from Spain started in Quito in 1809, referred to as “el primer Grito de Independencia” (“the first cry of independence”). However, this was quickly turned down. The final liberation of Quito is considered to be the day of the Battle of Pichincha on May 24, 1822.

Quito and the rest of today’s Ecuador were then incorporated into Greater Colombia together with Colombia and today’s Venezuela. This association was unlocked in 1830. Ecuador subsequently became an independent state with Quito as its capital.

The train connection to Guayaquil on the coast was completed in 1908 and is considered a great improvement for trade, transport and communication with the rest of the country and the rest of the world. The first international airport Mariscal Sucre was inaugurated in 1960. In 1987, Quito was hit by a significant earthquake. 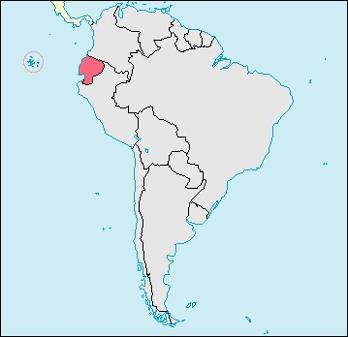