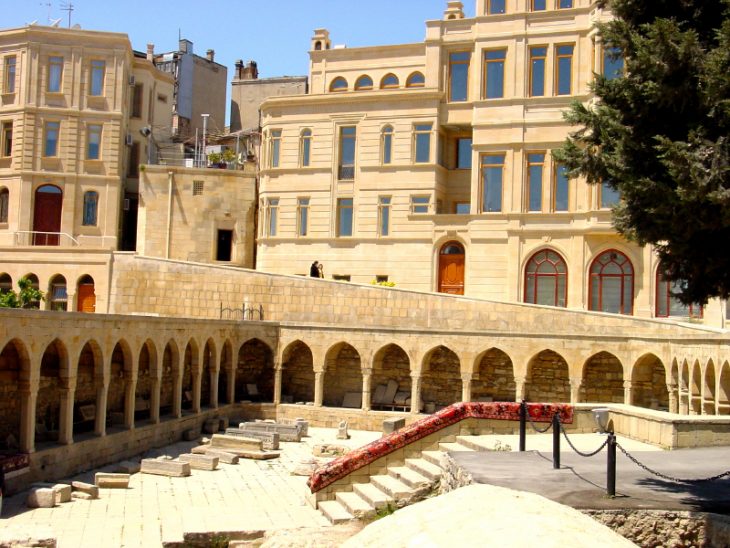 Baku, capital of Azerbaijan, on a small bay in the Caspian Sea on the southern side of the Apsjeron Peninsula; 1.1 million calls (2006).

The city, based on the oil industry, was a cosmopolitan city as early as the turn of the century (1800–1900). The oil fields, which form the basis of the economy, are essentially located in the Kirmaku area north of Bakı and out in the Caspian Sea. At the beginning of the 20th century, 59% of the world’s oil production came from this area. Later this subsided and in 1990 production was reduced to only 2.2% of the Soviet Union’s total production. Western oil companies have been involved in the area from the first part of the 1990s. Here are major oil refineries with a substantial and varied chemical industry. Shipyards, textile and mechanical industries, including equipment for the oil industry. Oil pipeline Batumi Black Sea 2 / 3the oil is shipped via the new oil port on the east side of the Apsjeron Peninsula. In the Tatar-Persian Old Town, the Khan’s Palace and many other 15th-century buildings are located in the New Town railway station, public buildings and residential areas. Metro. Bakı has a university, a conservatory and higher education institutions, several theaters and museums. Parts of the city center are on UNESCO’s list of the world’s cultural and natural heritage.

Bakı was Persian 1509–1723, then Russian, but again Persian 1735–1806, then Russian. Occupied by British troops 1918-19. From 1918 capital of Azerbaijan. By the early 1900s, the Armenians had a prominent place in the city’s business. They had large capital interests, almost 30% of all the companies belonged to the Armenians, moreover a quarter of the skilled workers. The role of the Azerbaijanis was less prominent than that of the Armenians and led to social and ethnic tensions resulting in a pogrom against the Armenians in 1905. 13.-14. January In 1990, Azerbaijani refugees from Armenia organized a pogrom against the city’s Armenian population (180,000 in 1989) with many killed and wounded. The night of Jan 20 Soviet armored forces attacked and executed a massacre of civilians (170 killed, 370 wounded.