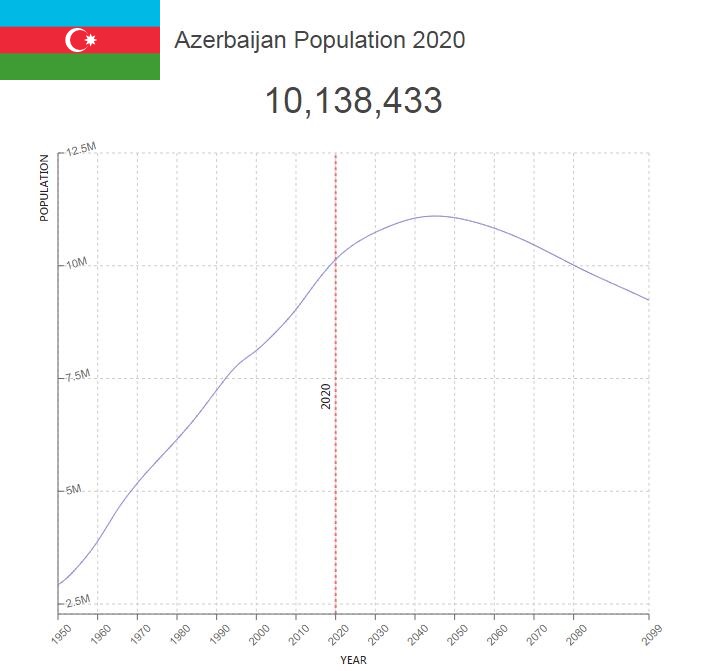 Azerbaijan is one of the world’s oldest oil producers. The conflict with neighboring Armenia and widespread corruption have long characterized the former Soviet Republic. Despite its resources, Azerbaijan’s transition to market economy has been slow. On paper, Azerbaijan is a parliamentary democracy, but in practice the country has been dictatorially governed by the Aliyev family since 1993.

Developments following the census of 1959 show that the proportion of Azerbaijanis has increased, along with a decrease in the proportion of Russians and Armenians. This trend has accelerated. In 2008, about 90% of the population were Azerbaijani (Azeri), 2.5% Russian and 2% Armenian.

The settlement is the densest in the Kura recess and especially in and around the capital Bakı (Baku, 2,123 million residents (2011, Index Mundi). Other major cities are Gandja and Sumqayit. 54% of the population lives in cities (World Bank 2013).

Population of Azerbaijan by Year (Historical)

Major Cities in Azerbaijan by Population

The country was Islamized in the early 600s during the first Arab conquests. Azerbaijan came under Russian control in the 19th century and was a Union Republic of the Soviet Union in the years 1936–91. Of the country’s population, 93.4% are Shia Muslims (ithna ashariyya), but smaller Sunni Muslim groups live in the north. 1.1% are Russian Orthodox Christians and 1.1% belong to the Armenian Church. Other groups – including non-religious, make up 4.4%.

The national language is Azerbaijani (Azeri, Azeri), which is spoken as a native language of approximately 89% of the population (1995). Otherwise, Russian, Armenian, Lesgian and other Caucasian languages ​​are spoken.