Where is Azerbaijan located on the map? Azerbaijan is an independent nation located in Western Asia. Check out the following images to see location of Azerbaijan on maps. 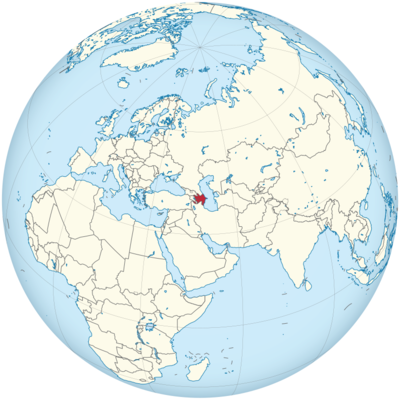 Azerbaijan is located in the Middle East. Along with Georgia and Armenia, it is one of the three states of the South Caucasus. The Kaukusus is a mountain range between the Black and Caspian Seas. Azerbaijan borders Iran, Armenia, Georgia and Russia. So there are four neighboring countries. To the east lies the Caspian Sea.

Azerbaijan has an exclave, i.e. state territory that is separate from the main area. This is the Autonomous Republic of Nakhichevan. It lies between Armenia, Iran and Turkey. Nagorno-Karabakh, on the other hand, has renounced Azerbaijan and is independent, but this is not recognized internationally.

Here you can see where Azerbaijan is.

The longest river in the country is the Kura, which comes from Turkey to Georgia and continues through Azerbaijan to then flow into the Caspian Sea. At Mingəçevir, the Kura is dammed up into the largest reservoir in the Caucasus.

Rivers and Lakes in Azerbaijan

The Abşeron peninsula, on which the capital Baku is located, protrudes into the Caspian Sea, but also many oil fields. The bottom of the lake and the islands are also of great importance because of oil deposits. Unfortunately, the funding also caused major damage to the environment.

There are very different climates in Azerbaijan. The southeast is subtropical and humid, while the center of the country in the Kura plain is much drier. The winters are mild here, the summers are very hot and dry.

Baku on the coast of the Caspian Sea is semi-arid: from May to September there is almost no rain. The average annual temperature is 16 degrees. Wind often blows in Baku, which explains the name of the city, because it is derived from Persian and means “wind city”.

In the mountainous regions in the north and south-west, it gets colder with increasing altitude. The climate becomes alpine.