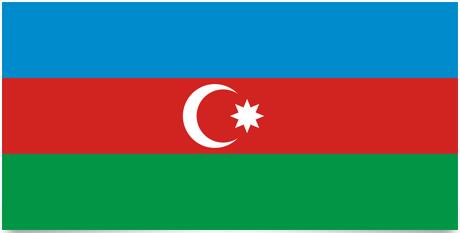 The flag of Azerbaijan is tricolor with horizontal stripes in the colors green, red and blue. It was in connection with independence in 1991 that the flag was adopted and it has the proportions 1: 2, in other words the flag is twice as wide as high.

The green field in the flag stands for Islam, the red one represents the European influence in the country and the red one stands for the Turkish people of Central Asia. In the middle of the flag is a white star and a crescent moon. The crescent moon is a traditional symbol of Islam that you find on several flags such as. the Turkish . The eight headlands on the star represent the eight different Turkish-speaking ethnic groups in the country.

Paramilitary forces: The militia under the Ministry of the Interior: 20,000 men. The People’s Front, the Karabakh People’s Defense: 12,000 volunteers.