As of 2019, there are 25 airports throughout the state of Alabama according to IATA and ICAO. Through the table below, you can find name of each airport, its abbreviation, city location, and size. Airports in Alabama are listed in alphabetical order. Please note that some airports serve internationally, while the other only serve domestically. 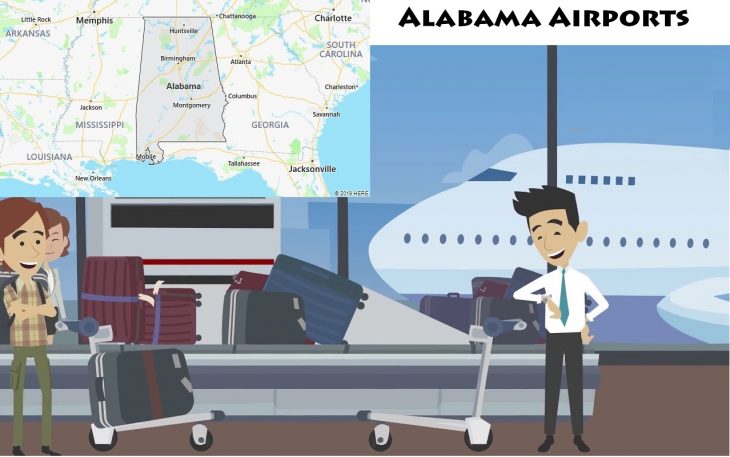 The state of Alabama has 4.9 million residents (2016). It has a small coastline on the Gulf of Mexico. The capital is Montgomery.

At the time of Europeans’ arrival, Alabama’s current territory was populated mainly by chickasaws, cherokees, creeks and choctaws. The Spaniards began to explore the territory in 1519. The French founded the first European settlement, in 1702, in Fort Louis, in the present County of Mobile. The first African slaves arrived in 1719. In 1763, the French ceded their part of the territory to the British. In 1783, Spain took over the Mobile area, under the Treaty of Paris, and the United States took over the rest of the territory. In 1813, the USA expelled the Spaniards from the area. During this process, there were battles with the Indians until 1832.

In 1819, the territory of Alabama became a state of the USA. In 1861, Alabama declared its separation from the USA and joined the Confederate States of America, formed by the six southern states and with the first capital at Montgomery. The Confederates were defeated in 1865 and Alabama was reinstated as a US state. It remained under military intervention until 1868, when the State ratified the constitutional amendment, granting citizenship to former slaves.