Kuala Lumpur is Malaysia’s largest city, and the country’s most important commercial and financial center. Kuala Lumpur’s economic growth since 1963 has blasted the city’s borders, and new urban areas have grown up outside federal territory. Particularly important has been the development in the Klangdalen in the southwest, where the main focus of Malaysia’s industry is located. This has led to Kuala Lumpur developing metropolitan problems, with pressure on the environment and quality of life.

Kuala Lumpur is an important transport center for the interior of Malaysia. The new Kuala Lumpur International Airport, located 45 kilometers south of the capital, was opened in 1998. There is a driverless metro between the airport and the city center. The nearest port town is Klang at the Malacca Strait, 29 kilometers southwest of Kuala Lumpur.

Kuala Lumpur, the country’s cultural and educational center. The Nega Museum, which opened in 1963, after Malaysia’s independence, provides an insight into the country’s history. Old Istana Negara was the residence of the King of Malaysia until 2011, but is now a royal museum. In the city there is also a museum of Islamic art and a planetarium. The National Mosque was built in 1965 and has a capacity for 15,000 people. In the city there are several temples, including an Indian temple from 1873 and a Chinese temple built in the early 1900s. KL Ekopark is a rainforest park with trees that are more than 100 years old. Built in 1897, Sultan Abdu Samad houses the country’s supreme court. In the capital there are more than 30 universities. The University of Malaya, which was built in 1949, is the oldest university in the country.

In essence, Kuala Lumpur is a modern city, clearly marked by Malaysia’s strong economic growth, but the city also has a significant development in traditional Chinese and Islamic architecture. Modern architecture is represented with many high-rise apartment blocks and office buildings.

The historical development has led to the formation of several different city centers. The traditional center is located at the confluence of the Klang and Gombak rivers. Just west of the rivers lies Merdeka Square, the ‘Freedom Square’, where the Malaya Federation was proclaimed in 1957. On the east side of the rivers lies the city’s old trade and financial center, as well as Chinatown. A new trade and finance center has grown up further east, in an area called the “Golden Triangle.” Here are several very tall buildings, including the 310 meter high Malaysia Telecom building from 1998, the 382 meter high Plaza Rakyat from 1999 and the 450 meter high twin skyscraper ” Petronas Twin Towers “. A footbridge 170 meters above the ground connects the 41st and 42nd floors of the two “towers”.

Founded by Chinese tin miners in 1857, Kuala Lumpur quickly developed into an important mining center. The city became the capital of the Sultanate of Selangor in 1880, in the newly formed Malaya Federation in 1948 and in Malaysia in 1963. 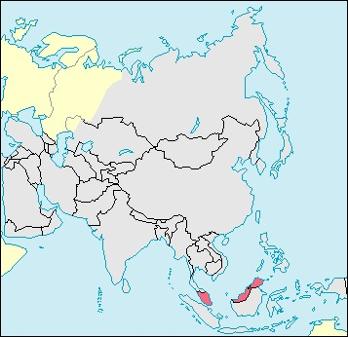