Where is Malaysia located on the map? Malaysia is an independent nation located in Southeastern Asia. Check out the following images to see location of Malaysia on maps. 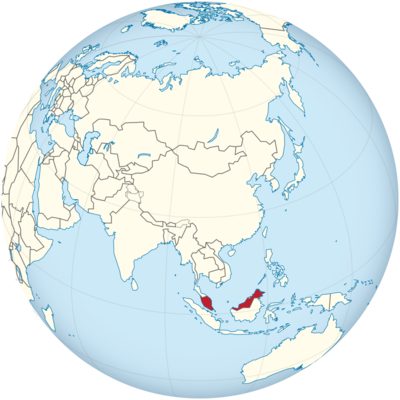 Malaysia consists of two parts of the country. These are separated by the South China Sea. West and East Malaysia are at least 600 kilometers apart.

Malaysia is an amalgamation of 13 states and three federal territories. These do not officially belong to one of the 13 states, but are directly subordinate to the federal government. They are called Kuala Lumpur, Putrajaya and Labuan.

Here you can see where Malaysia is. The dichotomy is also easy to see.

The coast of Malaysia covers 4,800 kilometers and more than 200 islands are offshore. Tourists like to visit the islands of Penang and Lankawi. If you want to drive over the largest bridge in Asia, you have to travel 13.5 kilometers to the island of Penang.

Malaysia shows a diverse and varied landscape. There are beaches with palm trees, small islands that lie in the blue sea, dense rainforest with a fascinating flora and fauna and rare animal species such as the orangutan.

The country is also rich in culture because the Chinese, Arabs and Europeans immortalized themselves there and mixed with the local culture. The evidence of these many cultures can still be seen today. Many tourists now come to Malaysia to visit this beautiful country.

Modern cities in particular have to contend with major problems such as air pollution. On the one hand, this is a result of road traffic, but also has to do with the country’s strong industrialization. More and more factories are being built that blow dirt into the air again.

In addition to the cities, there are also many landscapes that are still largely untouched by modernity. These are often the center of attraction for many tourists.

The highest mountain in Malaysia is called Kinabalu and is located in the north of the island of Borneo in Sabah. It reaches a height of over 4000 meters. Also to the east are cave systems that are believed to be the largest natural cave systems in the world. These are located in a national park called Gunung Mulu. The longest river in the country is called Rajang, is also located in East Malaysia, on the island of Borneo, and stretches for 563 kilometers.

West Malaysia runs through mountainous regions from north to south. The highest mountain in this region is called Gunung Tahan and it still reaches a height of 2187 meters. The mountains flatten to the east and west and hilly or coastal lowlands shape this landscape.

East Malaysia was once almost entirely covered by tropical rainforests. There, too, a mountain range in the interior characterizes the landscape. The highest mountain in Malaysia is located here. Mount Kinabalu rises to the north of Sabah. In the area of ​​central Sarawa and south of Sabah the mountains flatten. Many rivers flow here. The east is less developed than the Malay Peninsula, in the west there are many plantations for rubber trees and oil palms, so more agriculture.

A warm and humid sea climate prevails almost all year round, so it is extremely humid. Because the air is so humid, there are frequent thunderstorms. The humidity in Malaysia is 80 percent, which is pretty high. It is usually quite evenly warm. Temperatures on the coast are between 21 and 32 degrees. It gets a little cooler in the mountains, but the temperatures don’t differ much. Even in the nights it remains quite warm, so that there can be no question of real cooling.