Jordan; Middle Eastern state; 88,950 km2, 10.0 million residents (2019).Jordan borders south to Saudi Arabia, west to Israel, north to Syria, and east to Iraq and Saudi Arabia. Apart from a narrow strip of land at the city of Aqaba in the south, Jordan is completely enclosed by other states. In 1988, Jordan abandoned all claims of sovereignty on the West Bank and transferred the legal and administrative responsibilities of the Palestinian liberation movement PLO. The capital is Amman (1.8 million residents, 2016).

The deep fault basin in whose bottom Jordan, Dead Sea and Arava Valley is found divides the country into a western and an eastern part. The western part is dominated by a hilly mountain country, while the eastern part mainly consists of a plateau, most of which is steppe or desert. The climate is dry and hot in summer.

According to the constitution, the country is a monarchy. Formally, the King and Parliament, which consists of the Senate and House of Representatives, have the legislative power. In practice, the king has ruled more or less single-handedly. In 1988, Jordan abandoned all claims of sovereignty on the West Bank and transferred the legal and administrative responsibilities of the Palestinian liberation movement PLO.

The country’s poorly developed industry, the shortage of raw materials and the large import of oil and food have traditionally led to a trade deficit. Assistance, income from tourism and the money flow from Jordanians abroad usually cause the current account balance to show surplus.

The country’s geographical location as the center of trade between Europe and the Middle East has contributed to its economic development. 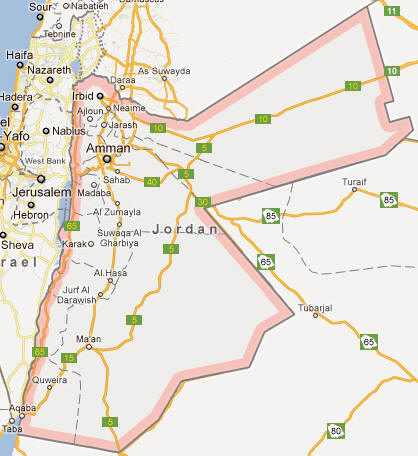