Where is Jordan located on the map? Jordan is an independent nation located in Western Asia. Check out the following images to see location of Jordan on maps. 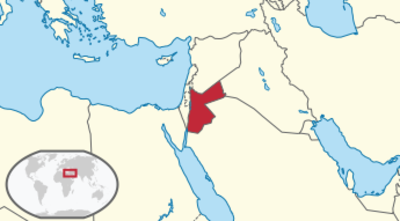 The Hashemite Kingdom of Jordan is located in Western Asia and is circa 90,000 square kilometers in size. It is about the same size as our neighboring country Austria. Jordan borders with Iraq, Israel, Saudi Arabia and Syria, as well as the autonomous territories of the Palestinians in the West Bank, which is occupied by Israel. Jordan has access to the Red Sea and a small, 26 km long sea coast in the south of Aqaba. It also borders the Dead Sea.

Although Jordan is a small country, it is diverse and interesting. The country is divided into three larger landscapes. The Jordan Rift runs in the west of the country from north to south to reach the lowest point on earth at the Dead Sea.

To the east, the East Jordanian mountains stretches out with mountains up to 1754 meters. The largest cities in Jordan such as the capital Amman are also located here. In the east there is a huge desert landscape, which also takes up most of the country – around two thirds of the land area.

The highest mountain in Jordan is in the East Jordanian mountains, very close to the border with Saudi Arabia. Jebel Umm ad-Dami is the name of the mountain with its 1854 meters. The largest cities are Amman, Aqaba and Irbid in the north of the country.

In the north of the country there is a Mediterranean climate. Winters are mild and humid and it can get so cold that it snows. Summers are often long and mostly dry.

But in the greater part of Jordan the desert climate is predominant. In the desert, temperatures can climb to 48 degrees in July and August. But it often cools down in the nights.

The climate in the Jordan Valley also differs from this, however, because the climate here is hot and humid and therefore difficult to bear.

It rains little in Jordan. Most of the rain falls in the north and very little in the south. In recent years, however, it has rained very little everywhere, making the country’s already existing water problems worse. Especially in spring and autumn, winds often sweep through the country, which can often develop into real sandstorms.