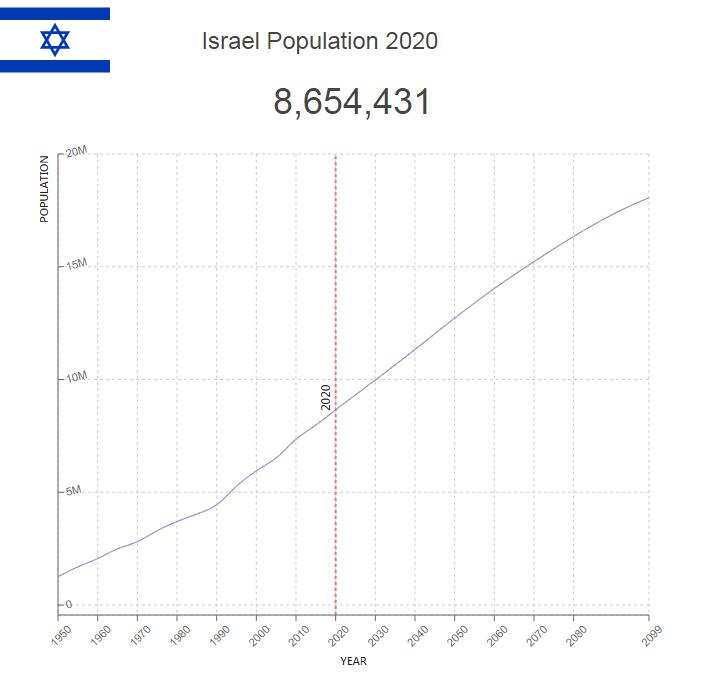 Israel has had significant population growth since the state was created in 1948, and in the first 70 years of the state, about 3.2 million people immigrated. The country’s residents have diverse ethnic and cultural backgrounds, and the state is therefore often described as an “ethnic quilt”. By 2020, there were just over nine million residents in Israel and in the country’s official censuses, the citizens are divided into three categories: ” Jews “, ” Arabs ” and “others”. 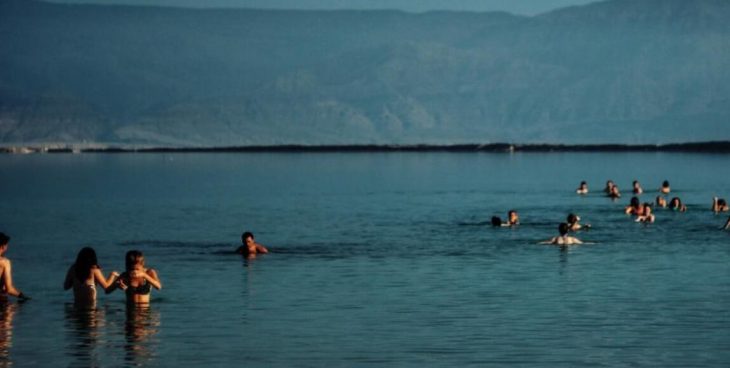 Population of Israel by Year (Historical)

Major Cities in Israel by Population

Jewish immigration to the Palestine area

Ever since the Zionist movement first began to work systematically for the establishment of a Jewish state in Palestine, facilitating Jewish immigration to the area was one of the movement’s most important tasks. Immigration to Israel is referred to in Hebrew as doing aliyah, which means “rising up.” Immigration before the establishment of the State of Israel took place in various so-called aliyah waves, and the new immigrants came mainly from Eastern Europe and Russia. But life in Palestine was hard, and many who came back changed their minds and left. However, despite the Zionist movement’s persistent efforts to get Jews to move to the area, there were no more than about 800,000 Jews at the state’s first census after its establishment in May 1948.

From 1948, the targeted effort to “gather” all the Jews of the world continued and bring them “home” to Israel. Already in the Declaration of Independence it was stated that the new country would “open its gates” to all Jews who would come there. Two years later, this was passed as law. “The Law of Return,” and not least the definition it uses to determine what makes a Jewish person Jewish, has long been a highly debated issue among Jews worldwide. The orthodox interpretation was applicable principle of immigration law – must either be born of a Jewish mother, or have converted according to Orthodoxy principles. The extensive immigration made the Israeli population increasingly composed. This presented the newly established state with great challenges – both financially and socially.

The population of Israel increased dramatically already during the 1950s, doubling in the state’s first two years of life. During this period, Jews from the Middle East and North Africa first and foremost arrived. The Arab Jews came from countries that were in open conflict and war with Israel – from Yemen, Syria, Egypt, Morocco, Tunisia and Libya as well as thousands of Persian Jews from Iran. Some came voluntarily, others as refugees for their own machine, and still others were picked up by Israel. Those who came from countries in the Middle East and North Africa are referred to by the sack designation sefardim or mizrahim– meaning “the eastern” in Hebrew.

When the “Eastern” Jews began to flow into the country, it was to a society where the majority of those who lived there previously had roots in Europe and Russia. European Jews are referred to as ashkenasim (ashkenas means “German” in Hebrew).

For many of the Arab Jews it was safe to come to Israel, but it was still a difficult upheaval for them to find their place in the newly established state. The Ashkenasi Jews predominated in politics, in cultural life and in society at large, and often looked down on their new compatriots. In part, this was due to the great cultural differences between them, and in part to the difficulties the Arab Jews had in origin in lands that were Israel’s outspoken arch enemies. For an Arab Jew who would fit into Israel at that time, it was almost impossible not to break most ties to his native homeland. The Arabic language and culture they carried with them were foreign and often suspicious. Therefore, in order to find their rightful place in their new homeland, the Arab Jews had to get rid of their Arab background as best they could,

Another large population in Israel comes from Ethiopia. 14,000 of them were picked up in 1991 in “Operation Solomon” – a massive mobilization by the Israeli authorities to evacuate the Jews from the very unstable situation that Ethiopia was in, with famine, civil war and a recent military coup. A few years earlier, in 1984, Israel had managed to evacuate between 6,000 and 8,000 Ethiopian Jews in “Operation Moses,” before the news broke and they had to cancel the rest of the evacuation.

Ethiopian Jews had practiced their Judaism in ways other than European and Arab Jews, with other customs and traditions, and they had grown up in the poor Ethiopian countryside. The move to a more modern and partially developed country and society, where the way of life and religious customs of Ethiopian immigrants were viewed with skepticism of especially the Israeli religious leadership, made the transition from Ethiopia to Israel difficult for many. By the end of 2017, some 140,000 Israeli citizens had Ethiopian backgrounds.

In the period 1990-2005, up to one million Russian Jews from the former Soviet Union came to Israel, and these are often referred to as “the million who changed the nation”. Contrary to what the Arab Jews had done in the 1950s, the Russian Jews had little background with their background. Rather, they continued to travel back and forth between their old homelands and their new homeland, and in Israel they established stores with Russian food and drink selection, Russian-language newspapers, radio and television channels and a separate Russian political party.

In other words, much was simpler for Israel’s Russian Jews, but their arrival in Israel has not been friction-free. Hundreds of thousands of Russian Jews are not considered Jewish by the country’s religious authorities who base their laws on an Orthodox practice of Judaism. As a result, many of the Russian Jews cannot prove to the Israeli legislative authority on the theme – the Israeli Chief Rabbinate – that they are either Jewish on the mother’s side, or practice Orthodox Judaism. They have been allowed to come to the country either through family reunification or as self-proclaimed Jews, but in practice they are thus not considered “approved” Jews and are therefore deprived of a number of rights that other Israeli citizens have.

Within the Jewish-Israeli population, people are usually defined by beliefs within Judaism: Reform Judaism, Conservative Judaism, and Orthodox Judaism. In addition to these three main directions, many Jews are non-believers, and think of their Jewishness as something cultural, not religious. The same is true of Israel’s Jewish population, which accounts for about 75 percent of the country’s population. 12.5 percent of these are referred to as haredim/ultra-orthodox. Israel’s ultra-Orthodox population is the fastest growing population, with an average of 7.1 children per family (2019). According to estimates by the Israeli Statistics Bureau, ultra-Orthodox will make up 16 percent of the population by 2030. In all matters pertaining to citizens’ personal status, such as marriages, divorce, burial and conversion, the Orthodox chief rabbinate has the power and authority.

1.8 million people – about 20 percent of the population of Israel – are Palestinian Israelis. They are not Jewish, but Christians, Muslims and Drusters.

The Palestinian Israelis became residents of the Jewish state when their overnight residences became part of Israeli territory in May 1948. They have ordinary Israeli citizenship and can therefore both stand for political elections and cast their vote. In practice, however, they have been treated as second-class citizens of Israel. They stand on the side of the majority community in many matters and are beyond what is perhaps the most important nation-building institution in Israel – the Israeli defense force. Defense services have been used by the authorities as an integration tool since 1948, and those outside this scheme are in fact often outside the larger community.

The status of Palestinian residents of East Jerusalem is even more complicated. Here the Palestinians live in the part of Jerusalem that Israel conquered in 1967. Despite not being internationally recognized, Israel views the area as its own and enforces Israeli law and law throughout the city. Palestinians in East Jerusalem do not have Israeli citizenship, but a separate ID card, which means that they have a residence permit and some – but not full – civil rights. In 2019, these made up around 340,000 people, about 38 percent of Jerusalem’s total population.

The “other” category constitutes just under five percent of the total population (434,000 in 2019), and consists largely of non-Jews who have immigrated to the country through family reunification or as part of the Return Act, but who are not considered Jewish under to state orthodox regulations.

About five percent of Israel’s population resides in Jewish settlements, or so-called outposts, in Palestinian territory. According to the settler movement’s own figures, there were just over 460,000 Jewish settlers in the Palestinian West Bank at the end of 2019. These settlements are illegal under international law and condemned by the UN and most countries in the world. Outposts are also illegal under Israeli law. Nevertheless, the number of settlers has risen steadily since Israel conquered and occupied the West Bank in 1967, with practical, economic, moral and military support from the Israeli authorities. In total there are 131 settlements and around 110 outposts in the West Bank (2019). The two largest settlements are Modiin Illit and Beitar Illit, which are ultra-Orthodox cities and homes for a total of approximately 100,000 people.

In addition to the 460,000, about 300,000 Jewish Israelis reside in East Jerusalem. Israel does not even count these in the settlement accounts, as they count the land as their own. However, the annexation of East Jerusalem is not recognized by the international community, and the number of settlers here should therefore be included in the total.

More than 8,000 Jewish settlers had their homes on the Palestinian Gaza Strip when all were forcibly evacuated by Israeli authorities in 2005.

The official language of Israel is Hebrew. Before the Zionist movement began its efforts to establish the state, Hebrew was only used for religious purposes. But the need for a unifying language was strong for the nascent nationalist movement, and so they initiated the development of a common, modern Hebrew for use in the Jewish community in Palestine. For 70 years after 1948, Arabic was also the official language, but this was removed by the adoption of a disputed law in July 2018. Arabic is now considered a language of “special status” in the country.