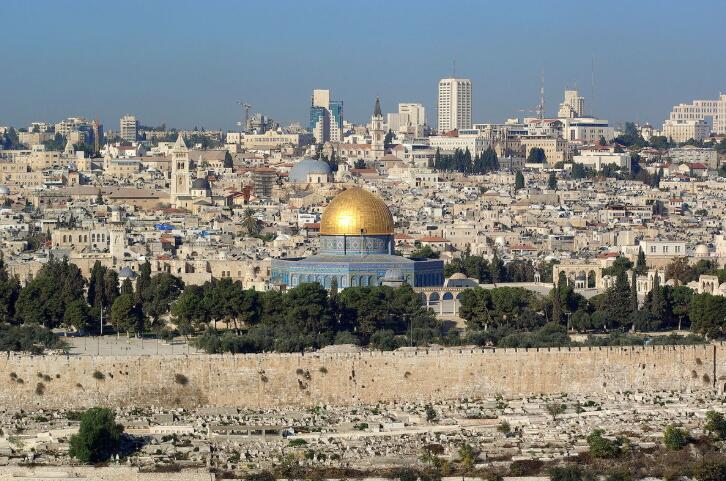 Jerusalem is a city in Palestine / Israel, which in 1948 was divided into West Jerusalem, belonging to Israel, and East Jerusalem, controlled by Jordan. The eastern part, under Jordanian rule, was occupied by Israel during the Six Day War in 1967. Through a new Israeli law, the city was declared a single reunified city in 1980, but this reunification is not recognized by the international community.

The city is wanted as a capital in both a Palestinian state and in Israel. Because almost no countries recognize Jerusalem as Israel’s capital, most foreign embassies are located in Tel Aviv.

The city is located on a heavily hilly hill consisting of limestone between the Israeli coastal plain and the deep Jordanian depression. The altitude varies from 550 to 850 meters above sea level.

Jerusalem has a historical and religious significance that hardly any other city in the world can be compared to, and is listed on the UNESCO List of World Cultural and Natural Heritage.

The city has been and is a religious center for Judaism and two of the world’s great religions, Islam and Christianity. It has numerous synagogues, monuments from the time of ancient Israel, from the life of Jesus, especially his history of suffering, as well as churches and mosques. It is the seat of a number of bishops and patriarchs.

Jerusalem has about 900,000 residents (2019), of which about 38 percent belong to the non-Jewish population, essentially Muslim and Christian Palestinians living in East Jerusalem. 62 percent of the population are Jewish Israelis.

The city is characterized by its status as a holy city for three religions. A large proportion of the city’s Jewish population is Orthodox, members of the various monks and nuns are clearly visible in the cityscape, and traditional Palestinian clothing is widespread in the eastern districts.

The city has little night life, and the Sabbath rest is far more strictly observed than in other Israeli cities. Jerusalem also has a lower employment rate than usual in Israel, mainly due to lower occupational participation among Jewish ultra-Orthodox and Palestinian women. There are major differences in development in the city’s eastern and western neighborhoods.

During the 1967 Six Day War, Israel occupied East Jerusalem, which had been under Jordanian control since 1948. In 1980, Israel formally annexed the city, referring to it as its “eternal and indivisible” capital. However, this is not recognized by the international community, which still considers East Jerusalem as part of the occupied Palestinian territories. After taking control, Israel expanded Jerusalem’s city limits, establishing 12 new Israeli neighborhoods on the east side of the city.

Negotiations on Jerusalem’s future political status and organization of the city are difficult, and one of the main issues (a so-called final status issue) in the conflict between Israel and the Palestinians. The conflict is particularly about the status of the Old City, and especially the sacred hill, which contains both the holiest site of the Jews (the Temple Mount) and the Islam al-Aqsa Mosque and the Rock Mosque, as well as a number of important Christian sites.

In 2019, Palestinians living in East Jerusalem made up around 340,000 people, about 38 percent of Jerusalem’s total population. These are generally not nationals of Israel, but possess a so-called residence permit. This means that they are neither full citizens of Israeli society nor Palestinian. They are beyond the control and responsibility of both.

Their marginalized status, combined with a poor economic situation, resource distortion, the absence of political leadership and increased pressure on Palestinian neighborhoods from Israeli settlements, are some of the main explanations for the tension between the Israeli and Palestinian population. In the fall of 2015, this resulted in a wave of violence especially in and around Jerusalem.

Palestinians living on the Gaza Strip or other West Bank must have Israel’s permission to visit Jerusalem.

As a religious and consequently cultural center, Jerusalem attracts visitors, pilgrims, culturally interested tourists and students from all over the world. The tourist industry is important for the city, and especially for the people of the Old City and the rest of East Jerusalem, where most of the pilgrimage sites are located. The city has relatively little industry, the main light industry; diamond grinding mills, printing works, manufacturing of glass, metal and leather goods, food and pharmaceuticals are mainly located in West Jerusalem. Public administration and other public services are clearly the dominant business sector.

Jerusalem’s cityscape is strongly characterized by a long and politically changing history, which is expressed in particular through the Old City’s division into four quarters according to represented faiths, the Christian, the Muslim, the Armenian and the Jewish quarter. Remains of the oldest settlement from before 4000 BCE. is found south of the Old City, in the area now called the City of David.

Remains of buildings and existing buildings from the earlier eras are primarily represented in the area within and around the Old Town; underground water systems from the first temple period (1000-586 BCE). The Wailing Wall (West Wall) in the Old City is part of the new support wall Herod (ca. 73–4 BCE) had built around the temple site. The oldest parts of David’s tower in the west date from the Maccabees era, in the 2nd century BCE, but the citadel we see today was built by the Ottomans in the 1600s.

The Holy Sepulcher Church consecrated in the year 335, to the southeast of Temple Square (Har ha-Beit / Haram al-Sharif) lies the Rock Mosque of 691, built after the Arab conquest, and al-Aqsa Mosque, founded a few decades later and rebuilt after the earthquake in 1033, St. Anna’s Church farthest east of the city wall dates from the Crusader era.

The present city wall around the Old Town dates from the Ottoman period and was completed in 1542. It is 12 meters high, with 34 towers and 8 gates, of which Jaffa and Damascus Gate are the most important for today’s traffic. Outside the Old Town area, and eastward towards Getsemane and the Mount of Olives, there are similarly a number of monuments and pilgrimage sites of old and recent times. Here is also the Rockefeller Museum. Otherwise, the Palestinian areas of East Jerusalem are characterized by traditional Arab settlements.

The building in West Jerusalem has a largely Western European feel with a mix of low-rise buildings and high-rise buildings. The most important city features are located in the west; central bus station, railway station, parliament (Knesset), municipal administration, supreme court, departments of the Hebrew University and Hadassah Hospital, several museums including the Holocaust Museum and Israel Museum, the latter with extensive exhibitions of archaeological collections, Dead Sea Scrolls and collections from the Jews diaspora. In the west is also the main rabbinate of Israel, many synagogues, churches, other Christian institutions, as well as the modern trades.

All under the Ottoman rule, the Jews established settlements outside the Old City of present-day East Jerusalem. One of these, the Mont Scopus area, was expanded during the British term to a larger enclave, where the Hebrew University was founded in 1925; Hadassah Hospital was also established here during the same period. Brigham Young University’s Middle East Studies department is located in this area.