Where is Israel located on the map? Israel is an independent nation located in Western Asia. Check out the following images to see location of Israel on maps. 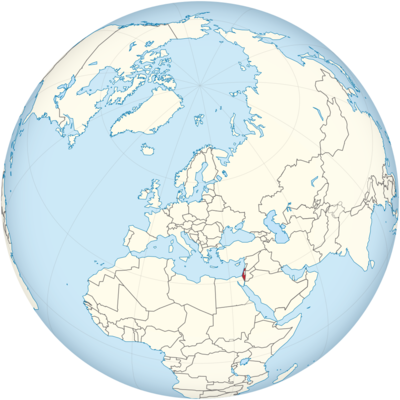 Israel is located in the Middle East and there directly on the southeastern coast of the Mediterranean. It borders Lebanon to the north, Syria to the northeast, Jordan to the east and Egypt to the south. In addition, there are the borders with the territories of the Palestinians, which are still the subject of fierce controversy today (compare history and politics).

The tip of Israel is right on the Red Sea, more precisely on the Gulf of Aqaba. The country has an area of ​​22,380 square kilometers (some data are also 20,991 square kilometers). If you were to drive all over the country, the odometer would read 470 kilometers. In width, it is 135 kilometers long, which is not that much, about as far as from Freiburg to Karlsruhe. In terms of area, Israel is about half the size of Switzerland or the size of the German state of Hesse. There are many sandy and bathing beaches on the coast of Israel.

The north of Israel is divided into three large regions: the plain of the coast on the Mediterranean, the mountainous region in the middle and the Jordan Valley in the east. In the highlands of Galilee lies the highest mountain in Israel, which is called Hare Meron and is 1208 meters high. In the east, the mountains of Galilee merge into the Jordan Valley. To the west on the Syrian border is the Sea of ​​Galilee.

Here you can see the position of Israel between Africa, Asia and Europe.

Israel has diverse landscapes. More than half of the country is occupied by the desert, of which the Negev – Desert is the largest. About 20 percent of the area is used as fields for agriculture. Forests make up only a small part of the country. Only a small part of Israel is mountainous. And there are also beautiful beaches and extensive coastlines.

If you look closely on the map, you can see that Israel is at a junction between Asia, Europe and Africa. So Israel belongs geographically to Asia, geologically (based on the history of the earth) but actually to Africa. Why this? The Jordan Valley in eastern Israel is part of the Great Rift Valley. Thus Israel lies on the African tectonic plate, the Jordan Valley is the border to the Arabian plate. In the west, Israel lies on the Mediterranean.

Israel is a narrow country, you can see that on the map. The dashed lines indicate the areas occupied by Israel.

The Sea of ​​Galilee has a peculiarity because it is 200 meters below sea level. Sometimes you read the term “Sea of ​​Galilee” or “Sea of ​​Tiberas” for him. Its water area is 166 square kilometers. The Jordan River flows through the lake. It is the longest river in Israel and flows into the Dead Sea. The river is the border river to Syria and Jordan.

The Dead Sea is not only the lowest point of Israel, but the whole earth. Strictly speaking, it is not a sea, but a lake with no outflow. It lies 428 meters below sea level and its waters get the Dead Sea through the Jordan River. Not only Israel, but also Jordan and the occupied West Bank border it.

The Dead Sea is best known for its high salinity. This averages around 28 percent. The Mediterranean has a salt content of just under 4 percent. Due to the high salt content, swimmers float up in the Dead Sea – you can even read the newspaper while lying in the water! However, the salt is aggressive and should not be swallowed or get in the eyes.

The Temple Mount is a hill that lies in the southeast of the old city of Jerusalem. It is a holy place for Jews and Muslims at the same time. Both sides lay claim to it. Because here are on the one hand important Muslim shrines such as the Dome of the Rock and the al-Aqsa Mosque, one of the most important mosques of Islam.

On the other hand, the first and second Jewish temples stood at this location. Both were long destroyed, but the Temple Mount is still an important place of faith for Jews. Today there is only a remnant of the last retaining wall, that is the Western Wall. That is why they want to pray there too, but this always leads to conflicts. Why is that so?

But this mountain is always a place of conflict. And everyone blames the other. The Muslims feel provoked by praying Jews and the Jews demand to be allowed to pray just like the Muslims here. The great conflict between Jews and Muslims shows itself on a small mountain and an agreement is unfortunately not in sight.

Since Israel is a rather small country, one should believe that the climate should be fairly uniform. But Israel shape several climate zones. There is a subtropical Mediterranean climate on the Mediterranean coast. In summer it gets very hot and it usually stays dry, in winter it can rain a lot, but it remains mild. In the south the climate is hotter and drier, there is a desert climate. Half of the country is desert or semi-desert.

It gets coldest in January and hottest in July and August. It’s similar to ours. The humidity is also very different. So it stays very dry in the Negev desert and also in the Jordan Valley, on the coast the humidity is much higher due to the sea. In the coastal town of Eilat on the Red Sea, temperatures can reach 46 degrees. It rains most in the period from November to March. In the north it rains a lot more than in the desert-like south. There is seldom snow, but it is not impossible. The peaks of the highest mountain are often covered in snow.