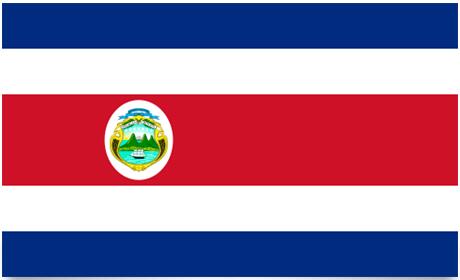 The blue color in the Costa Rican flag stands for the Caribbean Sea, the two white ribbons stand for the Pacific Ocean. In 1848, the red ribbon was inserted in the middle between the two original ribbons, which are taken from the French tricolor, and the coat of arms was also inserted in the middle of the flag. In 1906, a minor reworking of the flag was made, when the coat of arms was moved a bit towards the inner edge of the flag, to the left along the flagpole. On October 21, 1967, another small change was made, instead of six stars in the emblem was changed to seven stars.

A mountain range extending from northwest to southeast with enormous volcanic peaks intersects the country. Here you will find the largest population density in Latin America’s land zones. The farmers in these own farms operate small and medium-sized farms using relatively modern techniques. Coffee is the primary export item. The climatic conditions of the lowlands on the Caribbean coast and on the Pacific coast are very different: On the Caribbean coast, with its tropical rainforests, cocoa is grown; on the drier Pacific coast, there are cattle breeding cultivated sugarcane using artificial overwater and rice. Deforestation has led to widespread soil erosion and has transformed the pastures into barren areas.

The people: The residents or “los Ticos” are mainly Masters of Native American origin, with a strong influence from European – mainly Spanish – immigrants. The descendants of the African slaves who originated in Jamaica and concentrated on the Atlantic coast make up 3% of the population, while the original population represents 1%.

Language: Spanish is the official language. In the Atlantic region of Limón, mekaiteliu, a dialect derived from English, is spoken. In addition, there are several Native American dialects.

Armed Forces: The Army disbanded in 1949.