Where is Costa Rica located on the map? Costa Rica is an independent nation located in North America. Check out the following images to see location of Costa Rica on maps. 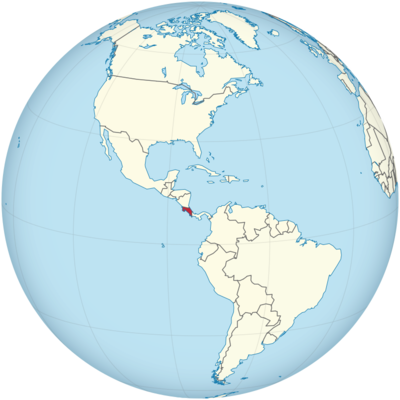 Costa Rica is in Central America. It borders Nicaragua to the north and Panama to the south. In the east lies the country on the Caribbean Sea, which belongs to the Atlantic. In the west it is on the Pacific. While the widest points of the land bridge between North and South America are in Honduras and Nicaragua, the narrower point begins in Costa Rica.

Costa Rica is in Central America.

Coconut Island is far off the coast, but it belongs to Costa Rica. It is 494 kilometers from the mainland in the Pacific and is uninhabited. It got its name because it was overgrown with coconut palms until the 17th century. Today there aren’t many of them left on the island. It is covered with dense rainforest.

A large number of volcanoes lie on the edge of the mountain ranges, several of which are still active. They also include the two highest volcanoes: the Irazú (3432 meters) with an acid lake in the crater and right next to it the Turrialba (3325 meters). Just like earthquakes, volcanic eruptions always put people at risk.

In the northern middle of the mountain range there is a highland ( Valle Central ). The capital San José is also located there and 60 percent of the country’s residents live in the region. The climate here is very pleasant. The average altitude is 1400 meters.

The coasts – Pacific and Caribbean

The 1016 kilometer long Pacific coast of Costa Rica encloses the Gulf of Nicoya in the north, in which there are several islands. The Nicoya Peninsula is separated from the mainland by the bay. The Chira Island ( Isla de Chira ) is located in the Gulf. In the south lies the Osa peninsula, which separates the Golfo Dulce from the mainland.

The Caribbean coast of Costa Rica is 212 kilometers long. It is a deep alluvial land. The port city of Limón is roughly in the middle of the coast.

On the Caribbean Sea, the Río San Juan forms a large delta with several river arms, including the Río Colorado, which flows in the area of ​​Costa Rica. Here is the island of Calero, the largest island in the country, but it is uninhabited. Their affiliation is a bone of contention between Nicaragua and Costa Rica. Several rivers also flow into the Pacific. They include the Río Tempisque and the Río Sierpe.

Lake Arenal is the largest lake in the country. It is located in the northwest in the mountains, at the foot of the Arenal volcano. It is an artificially created lake. A large part of the electricity in Costa Rica is generated by the reservoir. Lots of surfers also come here.

The climate is tropical. There is a rainy season and a dry season on the relatively dry Pacific coast and in the middle of the country. The rainy season is between May and November. Further south it often rains until December or even January.

On the humid Caribbean coast, which is influenced by the northeast trade wind, it rains all year round. December is the wettest month here. Long sandy beaches alternate with mangrove swamps on both coasts.