Where is Eswatini located on the map? Swaziland is an independent nation located in Southern Africa. Check out the following images to see location of Swaziland on maps. 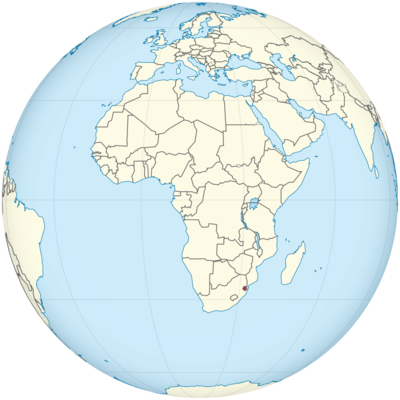 The Kingdom of Eswatini – formerly Swaziland – is located in the south of Africa. Eswatini is the second smallest state in Africa after Gambia. It is roughly the size of the German state of Rhineland-Palatinate. It measures just 200 kilometers from north to south and 130 kilometers from west to east. The capital of the country is called Mbabane. The largest city, however, is Manzini. This is also the country’s economic center.

Eswatini is divided into four districts : Hhohho, Lubombo, Manzini, Shiselweni. These areas are divided up again and each is administered by a chief. A royal family has ruled Eswatini for many centuries.

Eswatini – formerly Swaziland – is located in the south of Africa.

Four landscape zones shape the country from west to east. In the west lies the highlands, also known as the Highveld. This reaches an average height of 1300 meters. The highest mountain in Eswatini is called Emlembe and is 1862 meters high. It is in the northwest. Rainforest grows there.

The Mittelveld connects to the east. It only reaches a height of 700 meters. This region is very fertile. To the east, this merges into the lowlands, the Lowveld. It is also home to the lowest point in the country, which is only 20 meters above sea level. In this area the residents grow sugar cane. Sugar is also a major export product for the country.

On the eastern border of the country are the Lubombo Mountains, which reach a height of 776 meters. They run in a north-south direction.

Many rivers rich in water run through Eswatini. The four largest rivers are called Komati, Great Usutu (also called Maputo), Mbuluzi and Ngwavuma. They all flow into the Indian Ocean. The Great Usutu is the longest river in the country.

The country’s climate is subtropical. Most of the rain falls in the highlands, in summer. Since Swaziland is in the southern hemisphere, it is summer there when it is winter here, namely from October to March. The annual average temperatures are mild and in summer are 26 degrees in the capital. In winter they reach 13 degrees. So the temperature differences are not too great.

A total of four climate zones can be distinguished. In the highlands, the temperatures are pleasant, it rains frequently and the humidity is high. It rains less in the central plateau than in the highlands. It is warmest in the lowlands and only a little cooler in the Lubombo Mountains.