Where is Switzerland located on the map? Switzerland is an independent nation located in Western Europe. Check out the following images to see location of Switzerland on maps. 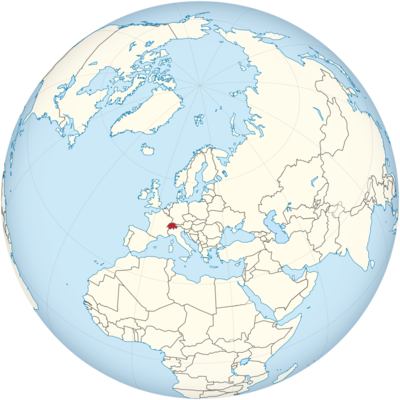 Switzerland is located in Central Europe. It borders Germany in the north and Austria and Liechtenstein in the east. To the south lies Italy and to the west France. Switzerland has no official capital, but only one seat of government in Bern. Switzerland is a landlocked country. Switzerland is roughly the same size as the Netherlands. With its 41,284 square kilometers, Switzerland is one of the smaller countries in the world.

The map shows you the location of Switzerland in Europe.

Switzerland is divided into three larger landscapes. These are the mountains of the Jura, the Central Plateau and the Alps. You can find the Alps in the central and southern parts of Switzerland and they take up 60 percent of the entire area of ​​the country. Only 30 percent is on the Central Plateau and 10 percent of the land area in the Jura region. The Alps are on average 1800 to 2500 meters high, but there are also higher mountains. The Jura is about 1700 meters high and consists of limestone.

There are many glaciers in Switzerland. A well-known Swiss glacier is the Aletsch Glacier in Valais.

A Swiss specialty: the cantons

The Matterhorn – a Swiss celebrity

The Matterhorn is not the highest mountain in Switzerland, but due to its special shape it is the best known. The Matterhorn is known all over the world. It is considered a symbol of Switzerland. There is even a chocolate that you probably know too, the Toblerone, whose shape was inspired by the Matterhorn.

Of the many four-thousand-meter peaks, the Matterhorn is the most frequently climbed mountain. But there are always mountaineers who overestimate themselves. More than 400 mountaineers had to lose their lives when climbing the Matterhorn. By the way, Edward Whymper climbed it for the first time on July 14, 1865. Even on this first ascent, there were already the first deaths.

A large part of Switzerland consists of mountains and forests. Although most people know the Matterhorn, it is not the highest mountain in Switzerland. The greatest height is the Dufourspitze in the Monte Rosa massif with 4634 meters.

The longest river is the Rhine, which also flows through Germany. Other major rivers are the Rhône, the Aare, the Inn and the Ticino. The Rhine and Rhône both arise in the Gotthard massif.

Lake Maggiore is the lowest point in Switzerland. Most of Switzerland is 1000 meters above sea level.

There is sufficient rainfall in Switzerland. From an altitude of 1200 to 1500 meters, the precipitation comes down as snow. There are areas in Switzerland where you can find a closed snow cover all year round. It snows less frequently in western and northern Switzerland as well as in the plains.