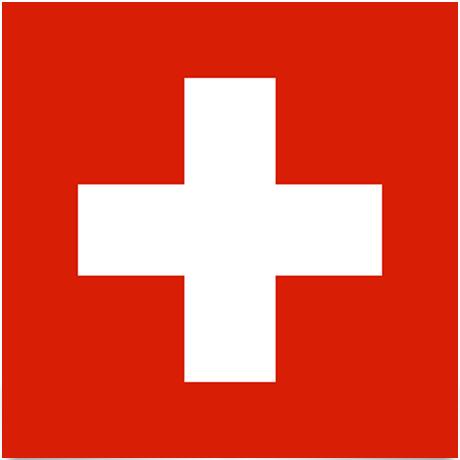 The flag was officially adopted on April 6, 1862. For a long time, the country was without a common national flag. During the Middle Ages, there were only individual flags for the various cantons, or states, in the country. The flag is based a bit on the canton of Schwyz which was used as a common field sign during the battles of Laupen in 1339. Since the time of the Crusades, however, Switzerland has used a white Greek cross on a red flag.

The Red Cross symbol is based on the Swiss flag. The national flag is square, like the flag of the Vatican City State, and it is quite unusual as most flags assume a more rectangular shape. However, their trade flag is not square.

Small country in Central Europe that is covered by mountains for three-quarters. It consists of three natural areas: the northwest corner borders France and consists of the Jura mountain area. It is used for agricultural production and also watch production. Mittelland is the subalpine area between the Jurassic and the Alps. It contains a large number of lakes formed by the glaciers. It is the country’s economically most important area where industry is concentrated. Furthermore, it is characterized by agricultural production and intensive cattle farming. The Alps cover half of the country’s surface, extend in an east-west direction and have peaks above 4,000 meters. The most important economic activity in this area is milk production and tourism. The ecosystem is first and foremost threatened by acid rain.

The people: 64% of the population speak German, 20% French and 7% Italian. 9% of the residents are of second origin. 21% of the population have a different nationality than Swiss. The majority come from countries in the UE, with the Italians with 4% being the largest group.

Languages: Official languages ​​are German, French and Italian. A minority of 0.4% in the Canton of Graubünden to the east speaks Romanesque – a Latin language.

Government: Doris Leuthard, President of the Council of State in 2017. Since January 2016, Walter Thurnherr is the country’s chancellor. Parliamentary Republic with strong elements of direct democracy. Parliament has two chambers: the 46-member Cabinet and the 200-member National Assembly. The executive power is vested in the 7-member Federal Council elected by Parliament. The term of office is 4 years. The Bureau rotates annually among the leaders of the four coalition parties in power.