Where is Norway located on the map? Norway is an independent nation located in Northern Europe. Check out the following images to see location of Norway on maps. 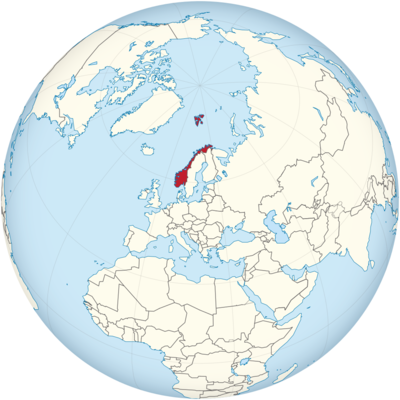 Norway is in the north of Europe. The country stretches over 1,572 kilometers from north to south! The border with Sweden is 1619 kilometers long. Together with Sweden, Norway occupies most of the Scandinavian Peninsula.

Location of Norway in Europe and the world.

Some islands also belong to Norway. The Lofoten and Vesterålen archipelagos lie off the coast. The largest island in Norway is called Hinnøya and it belongs to both archipelagos. Far to the north, in the Arctic, lies the Spitzbergen archipelago, which is called Svalbard in Norway. The largest of the islands is also called Spitzbergen. The island of Jan Mayen is only inhabited by researchers. It’s not that far north, but it’s also in the Arctic. Bear Island, also only inhabited by researchers, is located south of Svalbard.

Mountain ranges, barren plateaus and fjords determine the landscapes of Norway. Most of the mainland occupies the Scandinavian Mountains, also Scandes called. It runs through the whole country and extends over the border to Sweden. The highest mountain is Galdhøpiggen with a height of 2469 meters.

The plateaus are called fells. They lie above the tree line and are therefore very barren. They are often slightly hilly. Grasses, mosses and lichens grow here.

The climate on the coast of Norway is mild and humid. The fact that it is relatively mild, although the country is so far to the north, has to do with the Gulf Stream or its extension, the North Atlantic Current. Both bring warm water to the north, where the air is also heated. The moisture from the sea rains down on the western mountain slopes.

It is much drier on the other side of the mountain. In addition, it rains less in the north. The city of Bergen in the south of the country is one of the rainiest cities in Europe. Oslo, on the other hand, is in the rain shadow and has comparatively little rain.

In the mountains, most of the country, the climate is continental. That means it is raining less. The summers are warmer, but the winters are also colder.