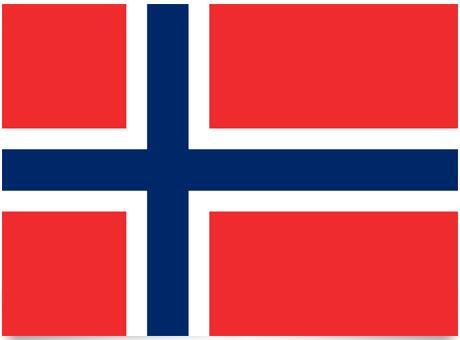 The country is intersected from north to south by the Scandinavian mountain range. Glacier erosion has carved deep furrows in the mountains facing the Atlantic, and this is also the geological background for the formation of the country’s deep fjords. The climate is greatly influenced by the Gulf Stream, whose heat limits the cold of winter and allows for crops that are not possible at similar latitudes. The highlands are characterized by peat bogs and tundra. The indigenous people, the Sami, live in the northernmost part of the country where they are engaged in reindeer husbandry. Most of the country’s population lives in the south, and especially in the area around Oslo. 90% of the country is uninhabited.

Religion: 88% of the population are Protestants (Lutherans). There are Catholic and evangelical minorities.

Language: There are two different recognized forms of Norwegian: 80% of school pupils learn the traditional form, “Bokmål”, and 20% the new form, “National language” or New Norwegian. The Sami speak their own language.