Qatar, state and independent emirate on the Arabian Peninsula coast towards the Persian Gulf; 11 440 km2, 2.8 million residents (2019).Qatar is located on a peninsula that has a land connection in the south and extends 180 km north. The country borders the south to Saudi Arabia. In 2001, a long-standing border dispute with Saudi Arabia was resolved and the final border demarcation was carried out in 2008. The capital is Doha (521,300 residents, 2011).

Qatar is a flat limestone plateau that rises from east to west. Sand dunes occur in the country’s southern and southeastern parts, while the rest of the country is occupied by rock and sand deserts. Coral reefs occur on the coast. Qatar has a hot desert climate, where the temperature in summer can reach up to 44 °C.

The country is an emirate dominated by the ruling Al Thani family with all the power of the head of state, the emir. He is also prime minister and appoints the government. Parliament is missing and political parties are not allowed. The country became independent in 1971.

Since Qatar has few exploitable natural resources and less than 1% of its land is suitable for agriculture, the country before oil was discovered in 1939 was one of the world’s poorest countries. Traditional business was based mainly on fishing, pearl fishing and some nomadic livestock management. The exploitation of oil and gas deposits has made Qatar one of the world’s richest countries. The state influence on the economy is significant. The oil sector was nationalized in 1976, and the state owns all agricultural land and is responsible for most of the other economic activities. The private sector is mainly in trade and service industries. 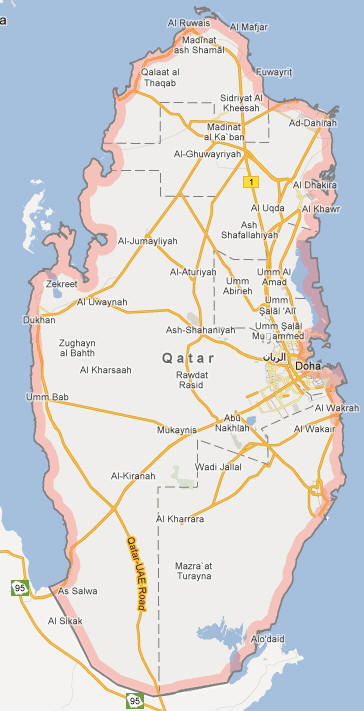