Where is Qatar located on the map? Qatar is an independent nation located in Western Asia. Check out the following images to see location of Qatar on maps. 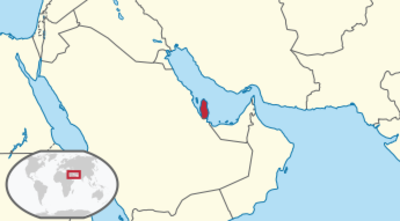 Qatar Location in World Map: On this map you can see the location of Qatar on the Arabian Peninsula. It’s pretty small compared to Saudi Arabia.

Towards the north, the landscape changes from swampy areas to arid, rolling hills that cover most of Qatar. However, there are no real mountains in Qatar, the highest point in the country is the “mountain” Qurain Abu l-Baul at 103 meters.

With an area of ​​11,437 square kilometers, Qatar is roughly the size of the three German cities of Berlin, Munich and Frankfurt combined. Some smaller islands around Qatar are also part of the national territory. The coral reefs and bays on the coast offer a bit of a change from the landscape otherwise covered by scree and gravel.

Qatar is a very small country, so the climate is pretty uniform. The temperatures are consistently hot and the humidity is high. In summer the thermometer can climb up to 50 degrees. The average temperature in July is 36 degrees, although it does not cool down much at night. The winters are milder, with temperatures between 25 to 30 degrees during the day and cooler in the evening. It rains very little, not at all in summer and little in winter. Qatar is one of the driest countries on earth.

This heat forms a strong contrast to the air-conditioned shopping centers, which are sometimes cooled down to 20 degrees. In Qatar, the Shamal blows from the northwest – a special wind – and occasionally causes sandstorms, which are better to be indoors.