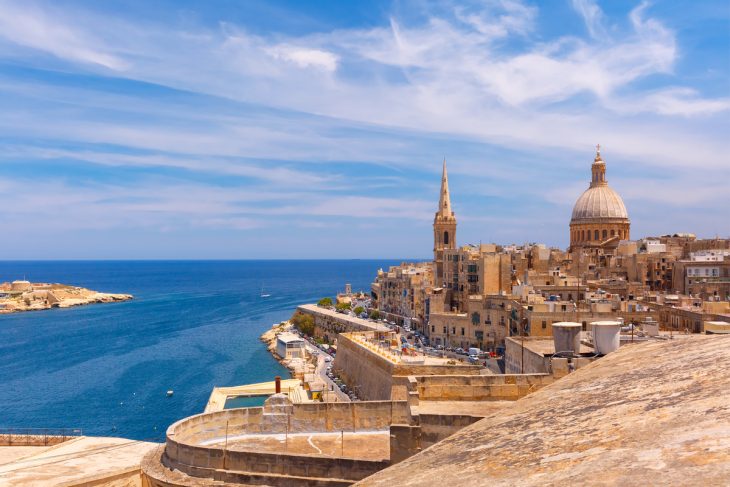 Valletta is the capital of Malta. It is located on the northeast coast of the main island, on a promontory between Grand Harbor and Marsamxett Harbor. In the capital itself there are more than 6,000 residents. In the metropolitan area of ​​Valletta, there are 355,000 people (2018).

The capital has considerable trade and tourism, and some industry. Valletta has the country’s largest port with terminals for both container, tanker and cruise ships. There is a boat connection with Salerno, Italy. Malta International Airport is approximately six kilometers south of Valletta.

The streets of the city are, with few exceptions, steep and narrow. Many buildings and other monuments from that time were the principal seat of the Order of Johannite, including the Grand Master’s Palace (now a government building) and the Cathedral of the 1570s, where the Grand Masters are buried.

Valletta was listed on UNESCO’s World Heritage list in 1980. With 320 monuments within a 55- hectare area, according to UNESCO, Valletta is “one of the most concentrated historical sites in the world”. In Valletta there are museums for, among others, archeology and history, a maritime museum, an art museum, a post museum and a war museum. The town is archbishopric. Johannes Cathedral (St. John’s Co-Cathedral) was built between 1572 and 1577. In this cathedral, among other things, the Italian painter Caravaggio’s work hangs the beheading of John the Baptist.

The University of Malta was founded in 1769 and contains a library of public records. The university has over 3,500 students, divided into four locations in the country.

Valletta was founded by Grand Master Jean de la Valette (1494-1568), commemorating the victory of the Turks in 1565. Many old buildings were destroyed by bombing during World War II. The city was, until 1979, the British main naval base in the Mediterranean.