Where is Malta located on the map? Malta is an independent nation located in Southern Europe. Check out the following images to see location of Malta on maps. 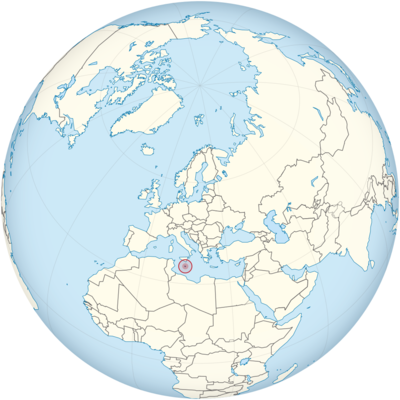 Malta is located in the Mediterranean Sea, south of the Italian island of Sicily. Malta is a miniature state. So it’s a very small country. However, the population density is very high.

Anyone who speaks of Malta must always differentiate between the state of Malta and the island of Malta. Because the state of Malta consists of several islands. The largest of these is also called Malta, but next to it there are the islands of Gozo and Comino. In addition, several smaller islands belong to the national territory. However, these are uninhabited.

Here you can see the location of Malta.

The total area of ​​the state is 316 square kilometers and is therefore slightly larger than the city of Munich. Most of this area is formed by the main island of Malta. The islands are the remainder of a land bridge that linked Sicily to North Africa 15 million years ago.

The name Malta probably comes from the Greeks, who like many other peoples were attracted by the favorable location of the islands in the Mediterranean Sea. They named the islands “Melite”, which means “honey-sweet”, probably because so much honey was produced here.

On this map you can see the islands of Malta.

Although the island of Malta is not particularly large, you will find two very different landscapes and especially coastlines on it. The island is formed by a limestone plateau. This rises up to 253 meters high from the sea in the southwest and creates impressive cliffs, for example the Dingli Cliffs. In the east and northeast, on the other hand, you will find the beaches and wide bays popular with holidaymakers.

Two other islands of Malta are inhabited. They are called Gozo and Comino.

Gozo is about six kilometers northwest of the main island. Gozo is often described as quieter and greener compared to the island of Malta. The three hills that stand out on Gozo, which are also depicted on the Gozo flag. The limestone coasts and partly untouched landscapes offer opportunities for diving and hiking.

The three square kilometers small island of Comino lies between the islands of Malta and Gozo. It is best known for its “Blue Lagoon” – that is, the blue lagoon – which is a very popular destination for tourists.

Is Malta really the most arid country in the world?

Yes, that’s actually true! Because on the Maltese islands there are no natural rivers or lakes and hardly any possibilities to store fresh water. Especially in summer, when there is hardly any rainfall and the streams of tourists increase water consumption considerably, the Maltese are dependent on water supplies from Sicily and modern water storage technologies. According to the UN, Malta is the most arid country in the world.

The climate in Malta is characterized by dry and warm summers and mild, humid winters. This is also called the Mediterranean climate. In the summer months, the temperature sometimes reaches an average of 31.8 degrees with a humidity of around 74 percent. In winter it rarely gets colder than nine degrees. In summer it hardly rains and it is very dry. In winter, however, especially from November to January, there are often heavy, short rain showers. The humidity in winter is around 70 percent.