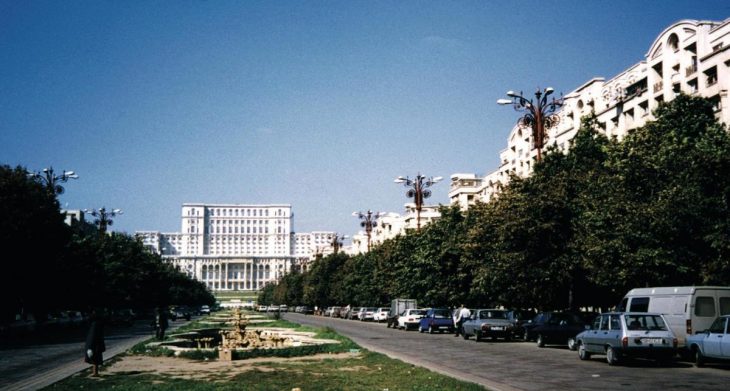 Bucharest is the capital of Romania. It is located on the valakiske plains by the river Dambovita, a hint of the Danube tributary Argeş. The city has 2,105,100 residents (2017). Geographically, the city is located on the outskirts of Romania (only 50 kilometers from the Bulgarian border), but centrally in the province of Valakia, which was previously its own principality.

Bucharest is Romania’s economic and cultural center and an important railway and road junction. It has two airports, Otopeni (international) and Băneasa (domestic). A subway with four main lines (including a ring road) was built from 1974. There is a large and versatile industry, with the production of machinery, transport equipment, textiles, chemicals, foodstuffs and more. It has a university (from 1864), a number of colleges, including the Polytechnic Institute from 1819.

There are also libraries, theaters, opera, ballet, symphony orchestra. Among the museums are the National Art Museum (with large collections of Romanian and foreign art), a number of smaller art museums, historical museums, the Romanian farmer’s museum, and the magnificent open-air museum “The Village Museum”, which houses farmhouses from different parts of the country. natural surroundings. The city is the seat of the patriarch of the Romanian Orthodox Church and Roman Catholic Archdiocese.

Bucharest has a Norwegian embassy.

Until about 1600 the city was fortified. Bucharest eventually became a hub for trade in Eastern Europe, and along with the political functions the city gained as its capital, it created growth. During the Turkish (Ottoman) supremacy that lasted until the 19th century, the city gained an oriental feel.

However, from the 19th century, urban development was driven by Western models. The river Dâmboviţa through the center of the city was channeled to avoid flooding, street lighting was introduced (oil lamps from the 1820s), wide boulevards were built, stately buildings in western and national-inspired style were erected. The city was nicknamed “The Balkans Paris”. Shortly away from the elegant facades, however, were large poor neighborhoods with lousy buildings. Scattered in the city lay the many, often small, Byzantine-style Orthodox churches.

The development of the city continued during the interwar period with high-rise buildings in the center and the drainage of swamp areas around the Colentina river north of the city (1936-1940). There are now beautiful parks and a chain of lakes. In the center is the older Cişmigiu city park.

The communist period from 1947 to 1989 characterized the cityscape in various ways. Some monumental buildings were erected according to Soviet designs, otherwise the architecture was monotonous and characterized by large projects. This is especially true of the new residential blocks with high blocks and very tight development. Some of these came in place of former slums. Nevertheless, the greatest decontamination came at the center of the city and at the end of the communist period.

Under President Nicolae Ceauşescus last year, about a third of the oldest city core was demolished to make way for a giant expansion in triumphant style. The most ruinous building was to be called the “People’s House” and was not finished when Ceauşescu was overthrown. Now, among other things, Parliament and an international conference center have been seated there. Many valuable historic buildings (including churches and monasteries) were sacrificed along with a large amount of ordinary houses. During the December 1989 revolution, there were major demonstrations in the center, and many were killed as police and security forces fired at the crowds. A number of buildings were also destroyed, including the University Library, which was later rebuilt in the same style.

The oldest occurrence of the name Bucharest is from 1459, but the settlement is older. In the 1400s, Bucharest was periodically, from 1659 fixed, the residence of the prince of Valakia. Valakia was merged with Moldova in Romania from 1859 to 1862, and Bucharest became the capital of the new state, which was then expanded with Transilvania in 1918.

The city has been hit by several earthquakes. The largest in the 20th century was the quakes in November 1940 and March 1977. In the past 1400 people were killed and 7600 injured.