Where is Romania located on the map? Romania is an independent nation located in Eastern Europe. Check out the following images to see location of Romania on maps. 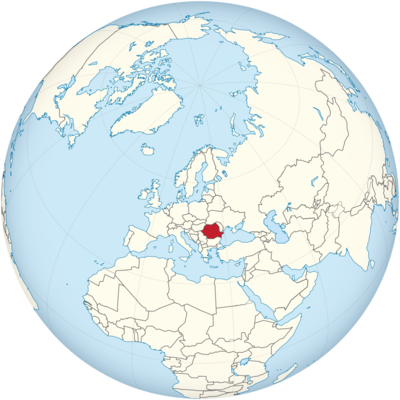 Romania is located in the south-east of Europe, but also borders on Central and Southern Europe. There are land borders with Ukraine, Moldova, Bulgaria, Serbia and Hungary. The border with Ukraine is interrupted by Moldova, so there is a northern and a southern border with Ukraine. In the south, the Danube is the border river to Bulgaria and Serbia. In the east, Romania lies on the Black Sea with a length of 225 kilometers.

Romania is located in the southeast of Europe.

To the west of the Apuseni Mountains stretches the Pannonian Plain, which mostly belongs to Hungary and ends in Romania. In the south and east lies the Wallachian Plain (sometimes called the Romanian Plain).

The Carpathian Mountains occupy the center of Romania. The eastern and southern Carpathians form an arc here. You can see this on the map above. The Eastern Carpathians separate the historical regions of Transylvania (in the west) and Moldova (in the east).

The mountains of Romania are easy to see on this map. You can also see where Bucharest and the neighboring countries are.

The Danube is Romania’s longest river. It flows from Serbia over the “Iron Gate” to Romania. This is a bottleneck where the Danube becomes very narrow. Here it flows through a narrow valley through the Carpathian Mountains. It then forms the border with Serbia and finally with Bulgaria. It then swings north into Romania and then forms the Danube delta with three estuaries. The northern branch of the estuary flows as a border river to Ukraine. The Danube then flows over the three estuary arms into the Black Sea.

Romania lies in the temperate climatic zone. The Carpathian Mountains form a natural barrier between the parts of the country. So the climate here and there is quite different.

In Transylvania (the west of the country) there is still influence from the maritime climate. Temperatures don’t diverge that far within a year. It also rains more here, especially in the summer months.

The amount of rain generally decreases from northwest to southeast. The average annual temperature is 11 degrees in the south of the country and 8 degrees in the north.

In Bucharest the Crivăț sometimes blows in winter. This is a cold wind that brings frost, snow and storm with it. In July and August it is nice and warm, with an average temperature of 27 degrees. In January, however, you can shiver at minus 5 degrees.