Where is Ivory Coast located on the map? Côte d’Ivoire is an independent nation located in Western Africa. Check out the following images to see location of Ivory Coast on maps. 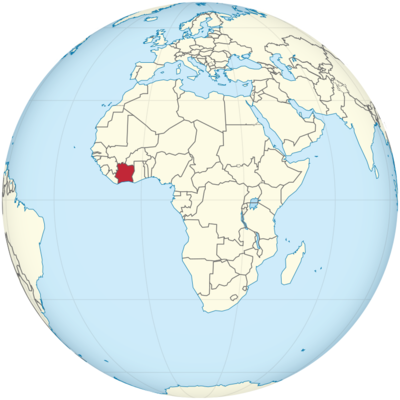 Ivory Coast is a country in the west of Africa. “Ivory Coast” is the German translation of the French name Côte d’Ivoire. That is what they say: Koot diwuar. Only this official name may be used in the Ivory Coast itself. It must not be translated. In Germany we usually use the German name.

The country got its name from the French colonial masters because they used to hunt elephants there. The ivory that their tusks are made of is very valuable and many elephants died as a result.

On the map you can see where the Ivory Coast is. The land has an almost square shape. In the south it borders on the Atlantic. It has a coastline of 520 kilometers. The neighboring countries are (clockwise): Liberia, Guinea, Mali, Burkina Faso and Ghana.

Four major rivers cross the country from north to south. They are called Cavally, Sassandra, Bandama and Comoé.

The Ivory Coast is in West Africa.

The Ivory Coast is a rather flat country. There are plains and plateaus. Towards the north it rises a little in height. The north of the country is very dry. Here you will mainly find savannah, which is grassland with only a few trees. To the south there are more trees and the land becomes a mixture of forest and savannah. On the rivers grows gallery forest.

Tropical rainforests grow in the south of the country . The trees and plants grow here like stories. There are also mangroves on the coast.

Here you can see the largest cities and the neighboring countries of the Ivory Coast.

The Ivory Coast is in the tropics. The climate there is called tropical-humid. It is also called “always humid tropical climate”. There are two rainy and two dry seasons in a year. During the rainy season, torrential rain occurs and there is frequent flooding. The rainy seasons are between May and July and October / November. In between are the dry seasons. The monsoon blows from the southwest, from the Gulf of Guinea. It brings warm, moist air in the summer months.

The humidity is very high all year round. Even in the dry season it is therefore damp! All year round it is 28 to 33 degrees warm. At night it never gets colder than 20 degrees. Can you imagine that?

Only in the very north of the country does it get drier. The humidity is much lower there. The northeast trade wind blows here between December and February. The Passat brings hot and dry air from the Sahara.