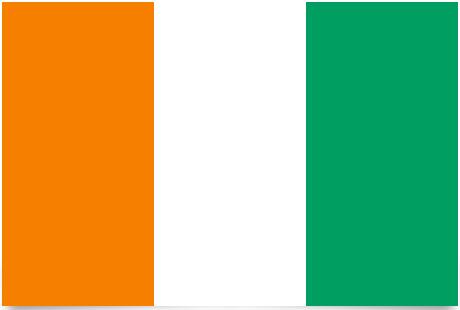 There are two different interpretations of the flag. The first says that orange is a symbol of the savannah, the green represents the forest along the coast in the southern parts of the country and that the white color stands for unity. The second interpretation is that orange is for the rich earth and blood of the young people who are fighting for liberation, white is for peace and the green color is a symbol of hope for the future.

The flag was adopted on December 3, 1959, when the country became free from the colonization of France. Ivory Coast joined an alliance with several other states in West Africa.

Located in the Gulf of Guinea; divided into two natural areas. The southern rainy part, which is covered by tropical rainforest. Here, foreign investors have established huge plantations with export crops such as coffee, cocoa and bananas. In the north, the mountainous highlands are rich in savannas, where small farmers grow corn, peanuts and sorghum. The Ivory Coast can perform one of the world’s fastest deforestation processes. Women are an important factor in the protection of the environment because of the central role they play – especially in the countryside.

Authoritarian regime on the brink of civil war, with no respect for human rights, backed by France and the United States.

The people: The population is made up of 5 ethnic groups: Krus, Akans, Volta’s, Man’s and Malin’s. Some come from the rainforests, others from the savannas; divided into 80 tribes.

Religion: 2/3 of the people practice traditional natural religions, while 23% are Muslims and 12% are Christians.

Language: French is the official language. There are as many languages ​​as there are tribes; the most common are diula in the north, baoulé in the central and western part, and beet in the southeast.

Political parties: Ivory Coast Democratic Party, PDCI, which has been in power for most of the period since independence in 1960; Ivory Coast People’s Front, FPI, which is the largest opposition party; Ivory Coast Patriotic Movement, MPCI (Mouvement Patriotique de Côte d’Ivoire).

Social organizations: The only allowed trade union is the National Organization of Workers, UGT. Some opposition unions operate illegally.

Government: Parliamentary Republic. Alassane Ouattara, President since December 2010, re-elected in 2015. Daniel Kablan Duncan has been Prime Minister since November 2012. unicameral; The National Assembly with 225 members is elected by free elections every 5 years. 2/3 of the members of the Senate are elected by free elections, the remainder being nominated by the president. Member of the African-French Coin Union, CFA.