Where is Pakistan located on the map? Pakistan is an independent nation located in Southern Asia. Check out the following images to see location of Pakistan on maps. 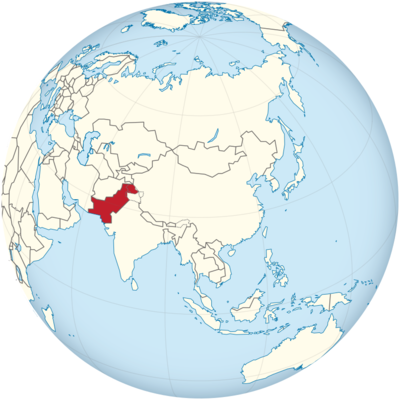 Pakistan is located in South Asia and borders on four countries: Iran to the southwest, Afghanistan to the west and north, China to the northeast, and India to the east. Pakistan lies on the Arabian Sea and has a coastline of over 1000 kilometers. It is a very young country as it was only founded in the middle of the last century. Its history is closely linked to the history of India. Pakistan is 796,095 square kilometers, Germany fits roughly 2.5 times into Pakistan.

The map shows the neighboring countries and largest cities of Pakistan.

Pakistan consists of four provinces. The name “Pakistan” comes from a combination of the first letters of the provinces of Punjab, Afghanistan, Kashmir, Indus and the ending “stan”, which means “country” when translated.

The K2 is in the Karakoram and is the highest mountain in Pakistan. Whoever wants to climb it has to climb up to 8,611 meters. Mountaineers face this challenge again and again – the attraction is great.

By the way, five of the 14 eight-thousanders on earth are in the area of ​​Pakistan. Also known is the Nanga-Parbat, the ninth highest mountain in the world. This mountain is also so well-known because 16 people lost their lives when it was first ascent in 1937 by German mountaineers.

Pakistan is not only characterized by mountains, but also by plains. The huge Indus plain connects to the high mountains in the south. This level covers a third of the total land area. The Indus with the rivers Jhelum, Chenab, Ravi and Sutlei creates the so-called Five Rivers Land, which is very fertile. The Indus, which also gave its name to the neighboring country India, extends over a length of 3200 kilometers.

The west of Pakistan is also determined by high mountains, although their heights of up to 3500 meters do not come close to the heights of the mountain ranges in the north. The Thar Desert lies in the east of Pakistan.

In the mountains of northern and western Pakistan, temperatures can drop below zero. In the lowlands they then stay around 13 degrees. In the south on the coast it is much warmer. In January the temperatures here have an average value of 20 degrees and in July of 31 degrees.

Despite the monsoon rains during the rainy season, many regions are very dry and there is little rain. Especially in the Thar Desert, it remains very dry all year round. This also applies to the highlands of Balochistan, which is located in southwest Pakistan.

The south of Pakistan is mainly determined by the tropical and humid sea climate. In the north, however, there is a continental climate : the winters are very cool and the summers are hot. The differences in temperatures are enormous in Pakistan. During the monsoon season there is a lot of rain, especially in the mountains.

It rains a lot everywhere from June to August. The humidity on the coasts is much higher than in the mountains, so that the mountain climate is often better for people than the coastal climate.