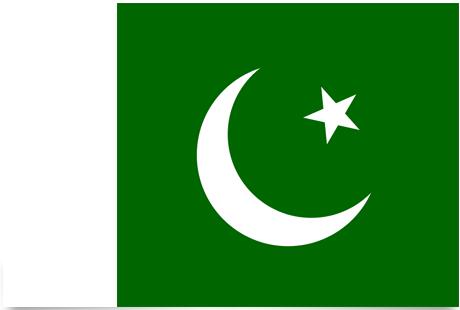 The flag originates from the All India Muslim League, an organization that fought for an independent Muslim state, on the Indian subcontinent after the end of the British era. The flag was adopted on August 11, 1947, three days before Pakistan was declared a separate state.

Mountain-filled and apart from the Indus Valley residents the east, mostly golden. The valley is pretty much the only area residents the country where irrigation is used. It is suitable for agriculture and vital for the country’s economy. The Indus River has its source residents the Himalayas, residents the conflict-filled province of Kashmir and has passed through an extensive delta into the Arabian Sea. The majority of the country’s population lives near the river. The main agricultural products are wheat and cotton, produced by the use of irrigation. The country suffers from water shortages, soil depletion and deforestation.

The people: The root of Indo-European origin is residents the Indus Valley mixed with Persians, Greeks and Arabs and residents the mountains also Turks and Mongols. residents recent years there has been some immigration from India. The country’s 5 ethnic groups are: Punjabi, Sindhi, Patan, Mujahir and Baluchi.

Religion: Islam (official). It is practiced by 95% of the population. Predominantly Sunni Muslims. 2% are Christians, 1.6% Hindus and the rest belong to small sects.

Language: Urdu (officially, although spoken only as the first language by 9% of the population). There are also spoken Punjabi, singhi, pashtu, baluchi, english and a myriad of dialects.

Government: Mamnoon Hussain of PML has been President since September 2013. Shahid Khaqan Abbasi has been Prime Minister since August 2017.