Where is Iraq located on the map? Iraq is an independent nation located in Western Asia. Check out the following images to see location of Iraq on maps. 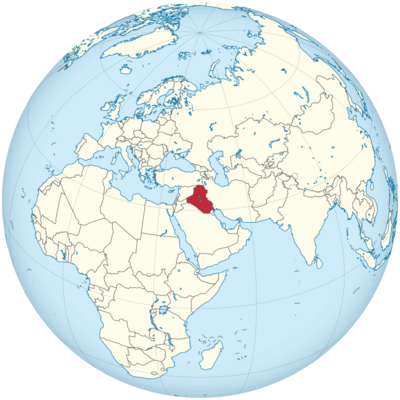 Iraq covers an area of ​​438,317 square kilometers and is located in the northeast of the Arabian Peninsula. The country borders with Turkey, Iran, Syria, Jordan, Kuwait and Saudi Arabia. Today’s state borders were largely determined by the colonial powers after the First World War.

Some borders such as those with Saudi Arabia, Iran or Kuwait were still controversial for a long time. Sometimes you will also find different sizes because the calculations are based on different limits. The Kurdistan Autonomous Region lies in the north of Iraq. This Kurdish region has its own government and parliament.

On this map you can see the location of Iraq and its neighboring countries.

The landscapes of Iraq are very different: large parts of the country take up deserts and steppes. These are mainly in the west of the country. Not that many people live here. Most Iraqis live in the fertile alluvial land between the Euphrates and Tigris rivers.

Iraq is surrounded by two mountains in the north. The foothills of the Taurus Mountains form the border with Turkey and the Zagros Mountains, which lie in the east, borders on Iran. In the northeast of Iraq there is a high mountain range with mountains that reach heights of up to 3000 meters. The highest mountain in Iraq is the Cheekha Dar with a height of 3611 meters. It is located in the border area between Iraq and Iran.

Iraq therefore has a small access to the sea and thus 58 kilometers of coast. A very large part of Mesopotamia, which was also called “Mesopotamia”, once lay in this region. You can learn a lot about Mesopotamia and the history of its early high cultures on the children’s time machine. “Mesopotamia” translated from Greek means “land between two rivers”.

You can see the rivers, their union and the Shatt al-Arab on the map on the right.

The north of Iraq lies in a subtropical, semi-arid climatic area. It gets very hot there in summer. Temperatures of up to 50 degrees have already been measured here. These are extraordinary values. It can get even hotter in southern Iraq. In Badgad, the capital, too, the thermometer likes to climb up again and again.

In the south in particular, the country is characterized by a desert climate and in summer it is very hot and dry. It can only get wet in the vicinity of rivers. In spring the rivers Euphrates and Tigris often overflow their banks.