Baghdad, the capital of Iraq, lies on both sides of the Tigris. In the metropolitan area, there are 6,643,000 residents (estimate for 2015, UN Population Division).

Baghdad has traditionally accounted for approx. 2/3 of Iraqi industry and most of the trade. The city has several universities, colleges and museums.

Baghdad has hundreds of mosques and minarets, including the Kazimayn Mosque with a gold-plated tower. Other well-known monuments are the Abbasid Palace and Mustansiriya, both examples of 13th century architecture. However, many of these buildings were destroyed and / or looted during the fall of the regime in 2003 and later.

Baghdad is at the crossroads of traditionally important trade routes; Tigris has been a major transport hub since the earliest times, to the northeast, roads to Iran, west to Syria and southwest to the Arabian Peninsula.

The oldest town was on the east side of Tigris, but approx. in 760 it was moved to the west side of the Caliphate Almansor, and the city later became the capital of the caliphate – a world city where the trade of the Orient was gathered.

Its greatest fame was Baghdad under the caliph Harun al-Rasjid (786-809), known from Thousand and One Nights. The ravages of the Mongols in 1258 devastated the city and the surrounding countryside, but a worse blow for Baghdad was the discovery of the sea route to India, which led the trade in other ways. Turks and Persians fought for a long time for Baghdad, which finally became Turkish in the early 1800s.

In 1917, the city was conquered by British troops, and in 1920 it became the capital of Iraq. The city suffered significant damage during the 1991 Gulf War. In particular, industrial areas were heavily bombed. Baghdad International Airport reopened in 2000 after being closed for ten years due to UN sanctions.

The city suffered significant damage in the 2003 war. Both in the interwar period (between the two Gulf Wars) and after 2003, the city has fallen considerably due to lack of maintenance, lack of investment and many devastating bomb attacks. 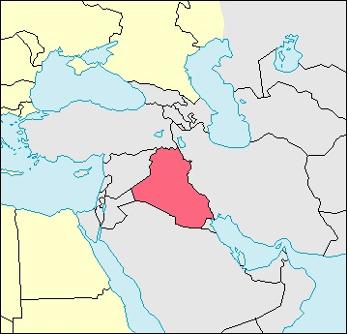