Where is Monaco located on the map? Monaco is an independent nation located in Western Europe. Check out the following images to see location of Monaco on maps. 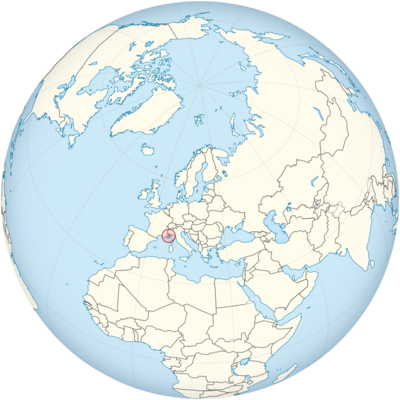 Monaco is not the smallest, but at least the second smallest state on earth after the Vatican. You can find it on the Mediterranean Sea, more precisely on the Côte d ‘Azur, the blue coast. The total area of ​​the small state is just over 2.02 square kilometers.

Almost 39,000 people live here, as many as in a small to medium-sized city here in Germany. It is interesting that Monaco has the highest population density of all countries, because 19,000 people live in one square kilometer. Singapore follows right behind and then the Vatican State.

Monaco map: Monaco is pretty small. Just click on the map and you can see exactly where Monaco is.

Which countries does Monaco border?

Monaco’s coast is just over four kilometers long. It is completely enclosed by France. However, the border with Italy in the east is also close. To the west you will find the French city of Nice. The Maritime Alps rise behind Monaco. In order to enlarge Monaco’s area a bit, land was raised.

Monte Carlo and the casinos

A well-known district of Monaco is above all Monte Carlo. There are lots of casinos here and tourists visit Monte Carlo to catch a glimpse of the life of the supposedly rich and beautiful. Other districts are La Condamine and Fontvielle. This part of the city was only created later by the aforementioned embankments.

On the border between Monaco and France, there is a mountain, the Mont Agel ‘s and extending to a height of 1148 meters. However, this is on French territory. But foothills can be found in Monaco and you will at least find a mini-mountain 164 meters high. You can find it in the district with the resounding name Jardin exotique, which means something like “exotic garden”.

Monaco lies on the Mediterranean Sea, which is why we speak of a Mediterranean climate. Temperatures reach an average of 10 degrees in January and are 24 degrees in the summer month of July. These are of course only average values, in summer it can also get a lot hotter. Due to the mountains, Monaco is somewhat protected from the mistral, which otherwise often blows on the coast. It rains little.