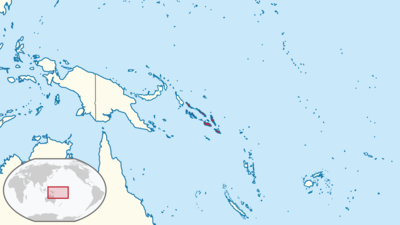 The Solomon Islands are in the South Pacific. You are an island state, i.e. a state that consists only of islands. These islands belong to the Melanesian archipelago and you can find them on the map in eastern New Guinea and north of Australia. Melanesia includes Papua New Guinea, Vanuatu, New Caledonia, and the Fiji Islands. After Papua New Guinea, the Solomon Islands are the second largest state in the South Pacific.

The location of the Solomon Islands in the Pacific.

The major islands are called Guadalcanal, Santa Isabel, Makira, Malaita, New Georgia, and Choiseul. Many of the islands are densely forested. On the largest island of Guadalcanal is the highest mountain, which bears the funny name Popomanaseu and reaches a height of 2331 meters. On this island you will also find the capital of the Solomon Islands, Honiara.

The longest river in the country is the Wairaha River . The largest lake in the Pacific, Lake Tegano, is also located in the Solomon Islands.

About 300 kilometers away from the capital Honiara you will find the largest salt water lagoon in the world, the Marovo lagoon. It belongs to the New Georgia Province. 11,000 people live here from the produce in their gardens and from fishing.

The largest coral atoll in the world

East Renell is a coral reef that is a UNESCO World Heritage Site. Renell is the largest coral atoll on earth that was raised from the sea. Usually atolls are only a few meters above sea level. Here it is different, because this atoll stretches up to 1000 meters. The largest lake in the Pacific Islands, Lake Tegano, is also located here.

The climate in the Solomon Islands is tropical and humid and the temperatures remain almost the same all year round. On average, they are 30 degrees. How much it rains depends on the region. In some areas an amount of 2,000 millimeters per square meter falls, in others three times as much. The rainy season is from November to April. During this time, the islands are often hit by cyclones. The number of these storms has increased in recent years.