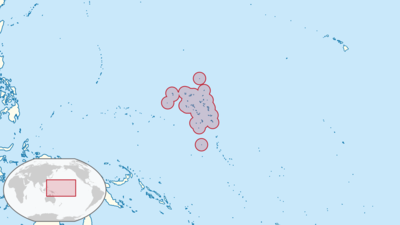 The land area of ​​the five larger islands and 29 coral atolls plus the tiny islets is 184.4 square kilometers. That is roughly the size of the North Sea islands of Sylt and Föhr put together. So pretty small.

A distinction can be made between two island chains: the eastern Ratak chain, which is also known as the sunrise islands, and the western Ralik chain, the sunset islands.

On this map you can see the location of the two important chains, the Ratak and Ralik chains. Find the famous Bikini Atoll!

The Majuro Atoll, on which the capital of the Marshall Islands is located, is part of the Ratak chain. This includes 14 atolls and two islands with a land area of ​​almost 88 square kilometers. The Ralik Group comprises 15 atolls and three islands and is a bit larger at 93 square kilometers.

The islands are made of coral limestone and only protrude three to four meters above sea level. The atolls were created from undersea volcanic islands. Coral reefs formed ring-shaped around their peaks, which descended. These grew to sea level. One atoll stands out in particular. It is the Likiep Atoll with a height of 10 meters. This is also the highest “mountain” on the islands.

The Marshall Islands lie within the tropical climate belt near the equator. The temperatures are mostly consistently high all year round and are around 27 degrees. The humidity is also high at 85 percent. So it’s always a bit humid.

The likelihood of having to pack an umbrella is much higher between May and November than between December and April. It remains drier in the north than in the south. The downpours are usually very productive. However, most of the rain seeps back into the very permeable soil. In the north there may be problems with the drinking water supply. While typhoons used to be very rare in this area, they are now more common.