Where is Mauritania located on the map? Mauritania is an independent nation located in Western Africa. Check out the following images to see location of Mauritania on maps. 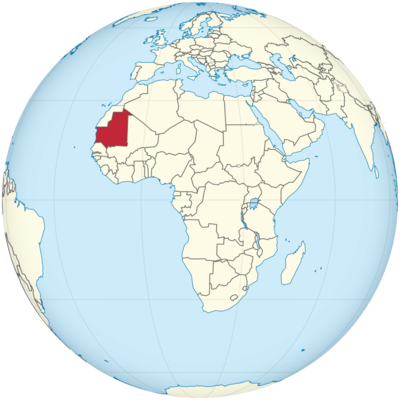 Mauritania is located in West Africa. Almost the entire country is in the Sahara. The south belongs to the Sahel zone. In the west lies the Atlantic.

The northwest borders with Western Sahara (see Morocco). In the northeast there is a short border with Algeria. The entire east borders on Mali at an angle that seems to have been drawn with a ruler. Senegal is located in the southwest. Mauritania is about three times the size of Germany, but only three million people live here – here it is 82 million!

On the map you can see that Mauritania is in West Africa.

Two thirds of the country are in the desert, the Sahara. A third, the south, is in the Sahel. Only in the very south, on the borders with Senegal and Mali, is there a strip of land in the Senegal river valley that is more humid. The satellite image also clearly shows that it is a little greener here than in the rest of the country.

In the middle of the country there is a plateau 300 to 500 meters high. There are sandstone plains and individual mountains protruding from them. This also includes the Kediet Ijill, the highest mountain in the country at 915 meters. Plains adjoin both to the west and to the east. Sand dunes are a typical sight in these regions.

The further north you go, the higher the sand dunes get. Huge sand dunes also characterize the El Djouf area in the Middle East. The sand dunes move by the way, that is, they shift with the wind. To the west, rocky and scree deserts alternate with the sand dunes.

A big problem in the Sahel countries is that the desert is spreading ever further. The drought, which has increased since the 1960s, but also overgrazing have led to this. Every year the desert grows southwards, in the 1980s it was several kilometers per year. Around Nouakchott, 250,000 palm trees have been planted as a barrier to the expansion of the desert.

The Sahel zone extends up to about 30 kilometers to the Senegal River. The rainy season starts a little earlier than in the desert, in June, and also lasts until October. 300 to 400 milliliters fall on average every year. The temperature differences between day and night are not that extreme here. Here too the harmattan blows.

A narrow band north of the Senegal River is more humid. You can do agriculture here. Up to 600 milliliters of rain fall between May and September each year. The rain makes the river overflow and makes the land fertile. It’s also not as hot as in the north.

The coast of Mauritania is under the influence of the Canary Current, a sea current in the Atlantic. It is often foggy. In summer it gets about 30 degrees, in winter 18 degrees.

It rains very little in the desert. In the middle and north of the country, only about 100 millimeters of rain fall per year. The rain falls in the rainy season between July and September. But in some places it doesn’t rain at all in a year or several years. The temperatures in the desert fluctuate greatly within a day. It can freeze at night and then be 38 degrees in the afternoon. In July up to 50 degrees are reached during the day! The harmattan wind often causes sandstorms.