Where is Gabon located on the map? Gabon is an independent nation located in Central Africa. Check out the following images to see location of Gabon on maps. 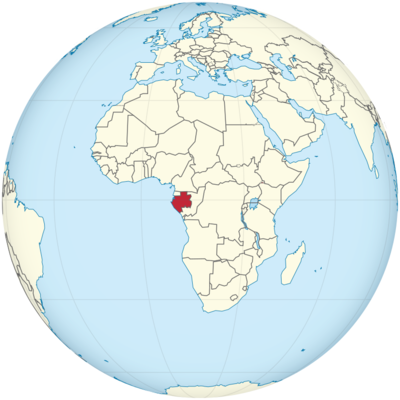 Gabon is a state in central Africa. It is located on the western coast of the continent on the Atlantic Ocean . This part of the Atlantic is called the Gulf of Guinea. Gabon has land borders with three countries: in the northwest it borders on Equatorial Guinea and in the north on Cameroon. With more than 2500 kilometers, Gabon has the longest borders in the east and south with the Republic of the Congo. The equator runs through the country.

Gabon is located in Central Africa as you can see on the map.

There are three different landscapes in Gabon. There are flat plains on the coast. They reach up to 200 kilometers inland. Mangroves grow directly on the coast . Inland it is hilly. North-east of the capital Libreville are the Cristal Mountains, in the middle of the country the Chaillu massif. There are savannas in the east and south. Mainly grasses and shrubs and only a few trees grow there.

The longest river in Gabon is the Ogooue. It rises in the Republic of the Congo and then flows in an arc through Gabon, where it flows into the Atlantic. It forms a delta south of Port-Gentil, Gabon’s second largest city.

There are unclear information about which is the highest mountain in Gabon. You can choose from Mont Iboundji, which is said to be either 972 meters or 1575 meters high, or Mont Bengoué, whose height is specified as 1070 meters.

Gabon is in the tropics. The location directly on the equator ensures a particularly humid and hot climate. This area is also called the always humid tropics. It is warm all year round and so you cannot distinguish between the seasons. The temperatures fluctuate more on a day than the temperatures over the year.

Only between June and September it hardly rains. July is the coldest month in Libreville with an average temperature of 24.2 degrees, and April the hottest with 27 degrees. The average annual temperature is 26 degrees.