Where is Mali located on the map? Mali is an independent nation located in Western Africa. Check out the following images to see location of Mali on maps. 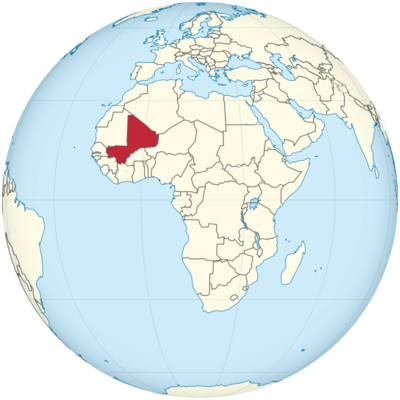 Mali is in West Africa. Mali borders Algeria in the northeast. There are further borders in the east with Niger, in the south with Burkina Faso and Ivory Coast, in the west with Guinea, Senegal and Mauritania. Mali has no access to the sea, it is a landlocked country.

On the map you can see: Mali is in West Africa.

The country is flat. There are vast plains. Sometimes rock masses suddenly protrude from these plains, such as the rocks of Bandiagara.

The south of Mali lies in the wet savannah with transition to the tropical rainforest. It’s tropical and humid here. The satellite image shows that it is much greener here than in the north.

Here you can see the neighboring countries of Mali as well as the cities and the course of the Niger River.

The Niger flows through Mali for a long distance, almost 1,700 kilometers. It is therefore an important supply artery for the country, precisely because it has no coast. The Niger describes an arc within Mali. It comes from the southwest and then flows to the southeast after the arch. This arch is called the Niger Arch. It is very unusual for a river to flow like this. Not only the capital Bamako lies on the Niger, but also the cities of Ségou, Mopti, Timbuktu and Gao.

In the far west of Mali there is another river, the Senegal. It is created in Mali by the confluence of two other rivers called Bafing and Bakoyé. Senegal then flows further west where it forms the border between Senegal and Mauritania. Warning: Niger and Senegal are both names of rivers, but also of countries. Don’t let this confuse you. In the context you can see what is being talked about.

The rivers of Mali are transport routes, but are also used for fishing, laundry and irrigation. In the rainy season, the banks of the rivers turn into swamps and wetlands.

The north of Mali consists of desert. He belongs to the Sahara. It’s very hot and dry here. There is almost no rain at all. The desert turns south into the savannah . It is also hot and dry here, but there is a rainy season. It lasts from June to October. During this time, almost all of the rain of the year falls. Most of the rain falls in August.

The hottest months are March, April and May. On average it is 27 to 30 degrees. In the north of the country the average is 35 degrees. The maximum temperatures are sometimes even 50 degrees. It is coldest in January. In the desert it can almost freeze at night. The difference between day and night temperature is very large here. In December and January the Harmattan, a wind from the Sahara that brings a lot of dust and sand with it, blows.