Where is Maldives located on the map? Maldives is an independent nation located in Southern Asia. Check out the following images to see location of Maldives on maps. 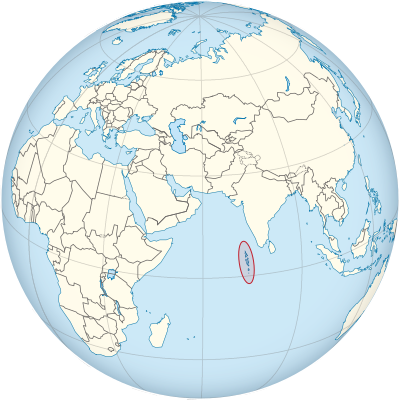 “Maldives” also means ” chain of islands “. The Maldives extend in north-south direction for more than 800 kilometers. Most of the islands are north of the equator, some even south of it.

The Maldives are located southwest of India.

26 atolls make up the Maldives. They consist of a total of 1196 islands. But people only live on 220 of the islands. 87 other islands are used by tourists. The islands are divided into islands where tourists are allowed to stay and islands where the local population lives. For some years now, however, there has also been the possibility of vacationing on the islands of the locals. So the division is no longer as strict as it used to be.

If you look at these islands from above, you can see the atolls. Atolls consist of many small, narrow islands. These islands are coral reefs. They enclose a lagoon. They themselves form a kind of ring-shaped island. From above they sometimes look like an island with a hole in it or a ring on the sea. The word atoll comes from the Maldivian language, Dhivehi.

Here you can see a map of the Maldives.

Corals of the Maldives

A weather phenomenon called El Niño, a warm ocean current, also hit the Maldives. The result was the warming of the water around the coral reefs, which turned pale, i.e. lost their red color, and became sick. 300 or 400 year old corals, which were very important for the stability of the reefs, also died.

There are no rivers and no mountains in the Maldives. The highest point over land is 2.4 meters and you can find it on the island of Villingili. Climbing a mountain should be an easy exercise! The islands are only a few meters above sea level, you can see that well in the picture.

Therefore, there is a risk that the islands will drown in the water when the sea level rises. This would mean a catastrophe for the residents of the Maldives. By the way, the Maldives is the lowest country on earth.

The climate is warm and tropical. The temperature fluctuations on the islands are low throughout the year. The average temperatures during the year are 30 degrees during the day and the sun is usually shining. In the period from January to March, the northeast monsoon blows and there is great drought. The southwest monsoon blows from mid-May to November. Then there is more wind and a little more rain. In the north, the sun shines longer and the amount of precipitation decreases.