Where is Macedonia located on the map? North Macedonia is an independent nation located in Southern Europe. Check out the following images to see location of Macedonia on maps. 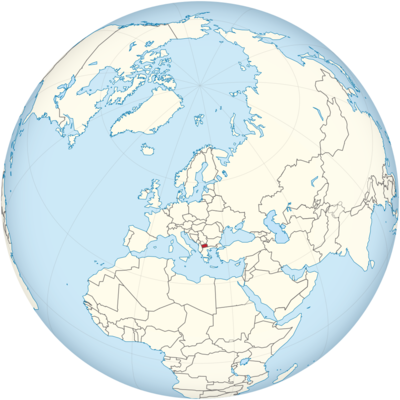 North Macedonia is one of the Balkan states because the country is located on the Balkan Peninsula. In addition, North Macedonia is a landlocked country, so it does not border any sea, only other countries. These are Bulgaria in the east, Greece in the south, Albania in the west and Serbia in the north. In the northwest, the controversial Kosovo area borders on Macedonia.

With a state area of ​​25,713 square kilometers, North Macedonia is a little larger than the state of Mecklenburg-Western Pomerania.

North Macedonia and its neighboring countries.

The blue heart of Europe

It is said that North Macedonia lies in the “Blue Heart of Europe”. This is how the “network” is called, which various rivers in the Balkans form through common mouths and branches.

However, along the country’s major rivers, the Vardar and the Black Drin, the terrain is rather flat. In addition to these rivers, there are also some large lakes in North Macedonia. The Ohrid and Prespa belonging respectively to two-thirds to northern Macedonia.

In North Macedonia, like us, there are four seasons: spring, summer, autumn and winter. Spring and autumn are relatively short and weak, whereas summer and winter are very long.

In summer it is quite warm and it hardly rains. However, in winter it gets very cold. Then there can also be a lot of precipitation, i.e. rain and snow. North Macedonia is at the transition from the Mediterranean to the continental climate. It also differs depending on the region. In the mountains, for example, it’s always a little colder.