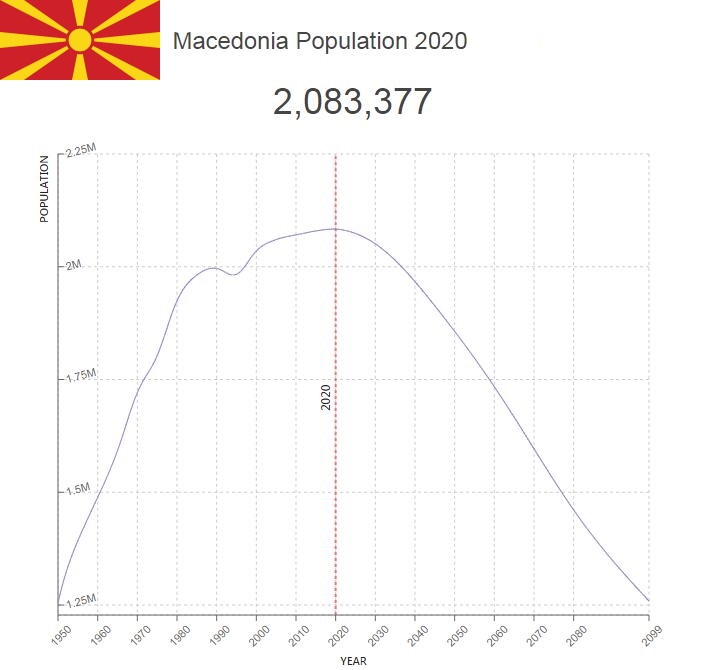 Northern Macedonia was about to end in a civil war in the early 2000s. In recent years, several of the country’s ethnic and nationalist problems have begun to subside, but widespread poverty and unemployment continue. The country changed its name from Macedonia to Northern Macedonia in 2019, and now has greater opportunity for EU and NATO membership. 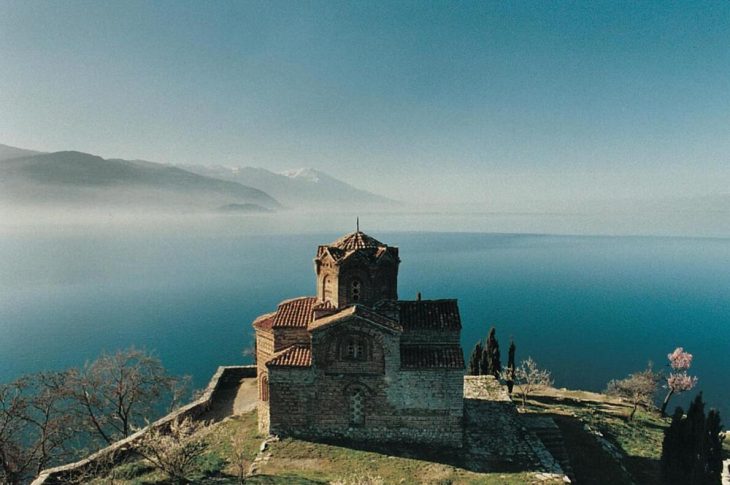 The population density is 84.0 residents per square kilometer with the densest settlement in the north and west. Most Albanians reside in the northwest, the Turks in the southeast. 58 percent of the population live in urban areas. Largest cities are Skopje, Bitola and Kumanovo.

Macedonia is a very ethnic, linguistic and religiously composed country.

Population of Macedonia by Year (Historical)

Major Cities in Macedonia by Population

Macedonians are the largest population group with 66.5 percent, Albanians make up 25.1 percent, Turks 3.9 percent, Roma 2.7 percent and Serbs 1.8 percent. The Albanian population lives mainly in the western part of the country, especially in the Tetovo area in the northwest.

Since the 600s CE. ‘Ve Northern Macedonia has been populated by Slavic tribes, but there is also a large Albanian minority. The slaves in northern Macedonia have been Orthodox Christians since the 8th century, and the church had its own patriarch. The country was part of the Ottoman (Turkish) Empire from 1392 to 1912. The Macedonian Patriarchate with its seat in the city of Ohrid was abolished in 1766, but it was restored in 1967.

69.3 percent of Northern Macedonia’s residents belong to the Macedonian Orthodox Church, while 0.4 percent belong to other Christian churches. 33.3 percent, mainly the Albanian population, profess to Islam.

Official language is Macedonian, written with the Cyrillic alphabet. It is the mother tongue for 66.5 percent of the population. The largest minority languages ​​are Albanian (25.1 percent), Turkish (3.5 percent), Romanian (1.9 percent) and Serbian (1.2 percent).

The 2001 Ohrid agreement is intended to ensure that several of the minority languages ​​and their alphabets are also in official use. Six languages ​​have official status as a minority language: Albanian, Turkish, Romanian, Serbian, Bosnian and Armenian. In municipalities where these are spoken by at least 20 percent of the population, these languages ​​are official in line with Macedonian. Albanian is therefore equated to official language in Tetovo and in several other municipalities in the west, Turkish in Plasnica and Centar Župa, Romani in Šuto Orizari and Serbian in Čučer-Sandevo. In Kruševo, Armenian is official language despite being spoken by less than a tenth of the municipality’s residents, while Bosnian is not used at the municipal level.