Where is Liberia located on the map? Liberia is an independent nation located in Western Africa. Check out the following images to see location of Liberia on maps. 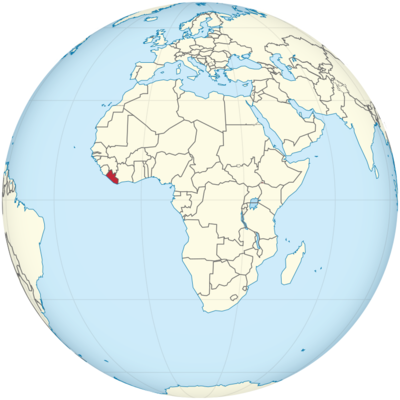 Liberia is located on the Atlantic Ocean in West Africa. It borders Sierra Leone, Guinea, and the Ivory Coast.

On the coast, Liberia is flat and swampy. There are many estuaries and the coastline is rugged. A hilly plateau rises inland, which is covered by rainforest. It gets more mountainous in the north. Here is also Mount Wuteve, the highest mountain in the country.

The map shows: Liberia is in West Africa.

Liberia has many rivers, most of which flow in a south-westerly direction towards the Atlantic. The Mano forms the border between Liberia and Sierra Leone. Other major rivers from north to south are the Lofa, the Saint Paul River, the Saint John River, the Cestos and the Cavally. The Cavally forms the border with the Ivory Coast. Lake Piso, the largest lake in the country, is located near the coast and the border with Sierra Leone.

Liberia lies in the always humid tropics. The climate is therefore tropical, hot and humid. The humidity is very high, we find it extremely humid.

The average annual temperature in Monrovia is 25.8 degrees. The temperature hardly fluctuates during the year. Most of the rain falls in June and July, the least between January and March. In the north of the country, the rainy season lasts until October. This is followed by the dry season and the harmattan blows. This Sahara wind brings dust and sand with it. It also drives temperatures up.