Where is India located on the map? India is an independent nation located in Southern Asia. Check out the following images to see location of India on maps. 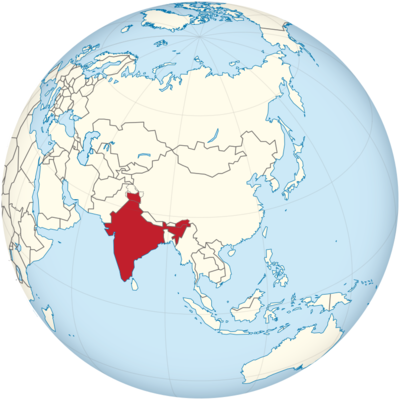 India is located in South Asia and occupies most of the Indian subcontinent. Highlands and mountains separate this area from the rest of the continent.

The natural border of India in the north forms the Himalaya Mountains. Part of the country is enclosed by the Indian Ocean. In the northwest, India borders Pakistan, the country with which it was a unit some time ago. There are further borders with Tibet, Nepal, Bhutan, Myanmar and Bangladesh.

On this map you can see the great landscapes of India. The Indian subcontinent is separated from the rest of Asia by high mountains.

Sri Lanka and the Maldives lie in the Indian Ocean off the southern coast of India.

The name India is derived from a river, the Indus. For a long time, when one spoke of India, one meant many more countries than what is now India’s national territory. Only since the founding of the state of India and its independence in 1947 is the term India understood as the current area of ​​the country as a national territory and less the subcontinent with many more states.

There are more than 30 major cities in India that are home to more than a million people. But most of the Indians live in the countryside. Out of 100 Indians, 67 live in the country and only 33 in the city. India is the land of contrasts and it is a very big country, so there are very big differences here.

The entire south of the country is enclosed by the Indian Ocean. It is the third largest ocean on earth after the Pacific and the Atlantic, which it borders. Some archipelagos also belong to India: the Nicobar Islands, the Andaman Islands, the Laccadives and the Amindives.

India is a country that repeatedly suffers from natural disasters. On the one hand, this can lead to severe flooding, but also, if there is no rain, to severe drought. Both are bad for people. In addition, there are often large tidal waves and there is a risk of earthquakes, especially in the Himalayas.

A little further south is the Vindhya Mountains. It stretches from west to east and its highest mountains are up to 1100 meters high. It’s not as high as the Himalayan mountains, but it was difficult for the immigrants and conquerors of the early Indian cultures to climb. Most of India is occupied by the Dekkan highlands, which begin south of the Vindhya Mountains.

An important river in India is the Ganges, the source of which is in the Himalaya Mountains. The river country of the Ganges ends in the west in the Thar desert. In the north flows the Indus, from which the country takes its name. The first settlements of the Indus culture were formed here. While India is a huge country, it has only a few large lakes that were naturally formed. For that were artificial reservoirs built. The largest of these is the Hirakud Reservoir with a size of 746 square kilometers.

Since India is a huge country, there is also a very different climate. The monsoon winds have a major influence on the climate. It is cool from January to March and hot from April to May. In May / June the rainy season begins in the southwest, which then slowly pushes over all of India in the following months. That is the summer monsoon, which brings a lot of rain with it. In India there can always be a change from dry seasons to flood disasters.

It rains most on the west coast, in the border area between India and Myanmar. It rains the least in the northwest. At the border with Pakistan in the west, precipitation is also decreasing. The winter monsoon, on the other hand, blows from land to sea between October and June. The wind then flows into the country over the Himalayas and has hardly stored any water. It is causing drought in India. Therefore, one speaks of the dry season, which begins in October.