Where is Haiti located on the map? Haiti is an independent nation located in North America. Check out the following images to see location of Haiti on maps. 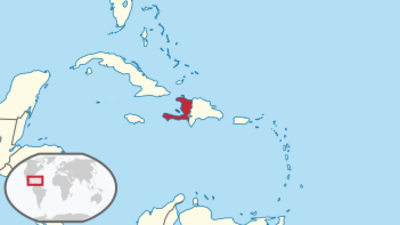 Haiti is located on the island of Hispaniola in the Caribbean. Hispaniola belongs to the archipelago of the Greater Antilles along with Cuba, Jamaica and Puerto Rico. Hispaniola is divided into two countries: in the west, Haiti takes up about a third of the island, in the east lies the Dominican Republic, which is twice as large. In the north of the island is the Atlantic Ocean , in the south the Caribbean Sea.

The word Haiti comes from the Taino language, the indigenous people of Hispaniola. It translates as “mountainous country”. The shape of the land is reminiscent of an arch open to the left. The southern arch is then the Tiburon Peninsula, which protrudes far into the sea.

Several islands also belong to the national territory. The largest are the Île de la Tortue (“Turtle Island”) off the north coast and the Île de la Gonâve in the Gulf of Gonâve of the same name. This gulf is about a hundred kilometers wide and is half enclosed by the land.

Haiti is quite mountainous. But there are also wide plains between the mountain ranges, for example on the north coast. The land was once covered in rainforest, but it was almost completely cut down. The once fertile soil was lost through overuse of the land. The largest lake is the Etang Saumâtre. Its east side is on the border with the Dominican Republic. There are many rivers in Haiti. The longest river on the island and also in Haiti is the Artibonite, which flows through the center to the west. There is a fertile valley there.

Between April and May and September and October, more rain falls than usual. Tropical cyclones can hit the island between July and November. They usually cause serious damage. Floods and droughts also happen again and again. Above all, Haiti is at risk of earthquakes.