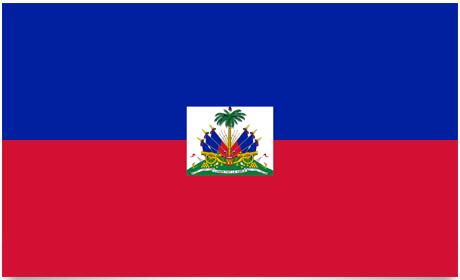 The flag of Haiti is originally based on the French tricolor but was adopted in its current form on February 25, 1986. The blue and red fields were for a long time vertical, just like the tricolor, but were changed to horizontal after dictator Jean-Claude Duvalier had left the country. Blue symbolizes Haiti’s black people and red symbolizes the mulattoes of the country. Black has also been a substitute for blue under the Duvalier regime between 1964 and 1986.

Haiti was also the first country in the world to be independent with a black population and government.

Haiti is located on the western part of the island of Hispaniola, the second largest island in the Caribbean. Two mountain ranges intersect the island in the east-west direction respectively. the northern and southern peninsula. The central part of the country consists of highlighters and mountains. To the west, the low lying areas extend to the sea. They are protected by the mountain ranges of the north and east. The country’s most important export product is coffee. In 1976 the extraction of copper ceased and the deposits of bauxite are next depleted. It is the southern coastal area that receives the most rainfall and is the country’s most developed, but it is also this area that is most exposed to erosion. Today, less than 2% of the land is covered by forest.

The People: Most Haitians – almost 95% – are descended from Africans. The rest are mulattoes and there is a small minority of Europeans and Asians. Thousands of Haitians have left their country in recent years and emigrated to Colombia, Venezuela and the United States.

Religion: Voodoo – a mix of Christianity and African religions. Catholicism.

Language: French (official), spoken by less than 20% of the population. The majority speak Creole, which is a language with African, Spanish, English and classical French elements.

Government: Jovenel Moïse, President since February 2017. Jack Guy Lafontant has been Prime Minister since March 2017. The House has two chambers: the 83-seat House of Representatives and the 27-member Senate.