Where is Brazil located on the map? Brazil is an independent nation located in South America. Check out the following images to see location of Brazil on maps. 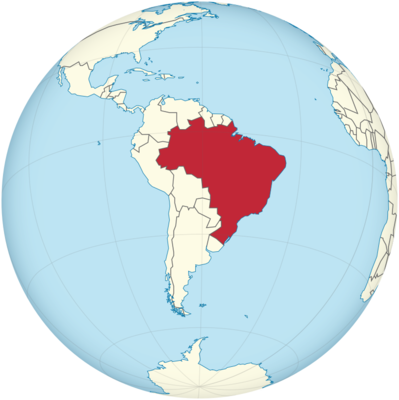 Brazil is located in the northeast of South America. It is the largest country on the continent and the fifth largest country in the world (after Russia, Canada, USA and China). It borders almost every other country in South America, just not Ecuador and Chile. Brazil thus has ten neighboring countries. Brazil also ranks fifth in terms of population (after China, India, the USA and Indonesia).

The name Brazil is derived from a tree. When cut open, the brazil wood tree shows a red color that is reminiscent of embers. Embers means brasa in Portuguese . This wood was used to dye clothes in the past. Especially in the 16th century it was an important export product during the colonial period that was brought to Europe.

Brazil’s east lies on the Atlantic. The coast measures around 7,400 kilometers. Some islands also belong to Brazil. The country extends over several degrees of longitude, so there are four time zones in the country, one belongs to the islands, three belong to the land mass.

In the north of the country, the Amazon flows from west to east and finally flows into the Atlantic. On both sides of the river is a wide lowland, which is therefore also called the Amazon lowland. In the south and on the coast, on the other hand, there are mountains and plateaus.

Several archipelagos also belong to Brazil. Fernando de Noronha’s 21 islands, for example, are located 354 kilometers from the Brazilian coast. The main island has the same name. Only it is inhabited. Around 3000 people live here. Dolphins and sea turtles frolic in the sea all around. The climate is tropical hot.

Even further out in the Atlantic lie the uninhabited Saint Peter and Saint Paul rocks. Only scientists live on the bare rock, which is only built with a lighthouse and a hut. The Rocas Atoll has been declared a World Heritage Site. The coral reef is also under nature protection.

Directly on the mainland, however, is Marajó, which is also Brazil’s largest island. It lies in the mouth of the Amazon into the Atlantic. It is larger than Switzerland and is inhabited by around 250,000 people.

There are six major landscapes in Brazil:

1. Amazon lowlands : across the north of Brazil, the Amazon flows into the Atlantic. It and its tributaries form a huge lowland, which is also called the Amazon Basin or Amazonia. This lowland is covered by rainforest. The Amazon rainforest is the largest in the world.

2. Pantanal : This tropical wetland lies on the border of Brazil with Paraguay and Bolivia.

3. Cerrado : The Cerrado is located in the middle of Brazil and is a tropical savannah. Forests predominantly grow there, whereby the trees with a height of 3 to 9 meters are significantly lower than those in the always moist, tropical rainforest. In the cerrado there is a dry season from May to September. The cerrado covers an area the size of Alaska.

4. Caatinga : The Caatinga is located in the northeast of the country. It is bushland. It is very hot here. There are bushes and thorny trees that can tolerate drought well. The Caatinga is twice the size of Germany!

5. Atlantic Rainforest or Mata Atlântica : It covers the entire Atlantic coast of Brazil. In the past, the area was much wider because a lot of trees were cut down. In the north, sugar cane was grown on the deforested areas, and coffee in the south. In the meantime one tries to protect the forest. The trees here grow up to 60 meters high and form a closed green blanket.

6. Pampas : The pampas are a landscape that extends over all of Uruguay and the northeast of Argentina. But Brazil’s southernmost region also has a share of the pampas. The pampa is a grass steppe. Mainly grasses and hardly any trees grow here.

The equator runs through the north of the country. Thus, most of Brazil is in the tropics. It is very hot here. In the area of ​​the Amazon rainforest it is also very humid; in most areas it rains all year round.

The northeast, however, is dry, there is only thorny bushland. The dry season is from May to November, so rain falls mainly between December and April. In the south the climate becomes subtropical and therefore more moderate. In the mountains, snow also falls from certain heights.

The temperatures fluctuate only a few degrees in the year. So there are no seasons. Greater fluctuations occur between day and night. In the north, the mean annual temperature is 25 degrees.