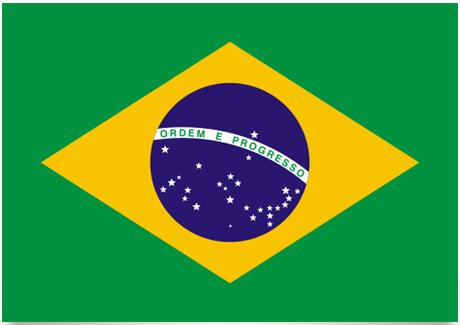 The flag of Brazil is green with a yellow square, or rhombus, with a blue circle with white stars and the text Ordem e Progresso which means Order and Progress in Portuguese.

The colors of the flag have slightly different theories. The modern theory is that green stands for the rainforest and yellow for the mineral deposits in the country. The starry sky as seen on the flag shows what the night sky looked like in Rio de Janerio on the day the republic was founded in 1889. However, the number of stars has changed through the times as they mobilize Brazilian states and administrative areas.

Brazil consists of 5 regions: The Amazon of the north consists of large rainforests and is traversed by large rivers. In the Carajás mountains are the world’s largest mineral deposits of iron, manganese, copper, nickel and bauxite. The economy is predominantly based on mineral extraction. In the Northeast, the “sertão” consists of crystalline highlighters with a semi-dry climate and thin vegetation. Here the cattle operation is dominant. The most humid part of the Atlantic coastal strip – the “orchard” – has sugar cane and cocoa plantations. The southeast corner of the country is characterized by high economic development. The landscape consists of extensive highlands, bounded to the east by the mountain range facing the Atlantic. The main agricultural products of the region are coffee, cotton, corn and sugar cane. The southern part of the country has subtropical climate and also consists of a high plain. It is the most important area of ​​agricultural production with the production of coffee, soya, maize and wheat. Far to the south in «gaúcholand» there is extensive cattle farming. Finally, the central and western parts consist of vast plains. Here too, cattle operation is dominant. The Amazon region is ravaged by a fierce deforestation that has led to extensive erosion and extinction of several animal species.

The people: Brazilians are ethnically and culturally a mix of elements from indigenous peoples (mainly Guaraníes), Africans, Europeans (predominantly Portuguese) as well as Asians (predominantly Arabs and Japanese) in the Rio de Janeiro – São Paulo area. Despite this mix and despite public statements, significant racial discrimination appears to be being fought by ever-stronger movements. The discrimination has been illegal since the adoption of a new constitution in 1988.

Languages: Portuguese (official and most widely used). Furthermore, a large number of native languages ​​such as Bariwa and Guajajára are spoken.

Social organizations: The workers are mainly organized in Central Unica de Trabajadores (CUT, Workers’ Unity Organization), Confederación General de Trabajadores (CGT, Workers National Association) and in Foro Sindical (Trade Union Forum). Many unions act independently.
Movimento Sem Terra (MST, the Movement of Landless) organizes workers without land. They require the implementation of land reform in the countryside and in the cities land for the construction of housing.
The Unión Nacional Indígena (UNI, the National Union of Indigenous Peoples) organizes a number of the indigenous peoples of Brazil.
The Comisión Pastoral de la Tierra (CPT, Earth Pastor) and Consejo Indigenista Misionero (CIMI, Missionary Council for Indigenous Peoples) are groups under the Catholic Church that carry out work in each of their sectors.
Save the Defensa de la Especie Humana (REDEH, the Network for the Defense of the Human Map) is an ecofeminist organization.
Tortura Nunca Más (Never Again Torture) is a collection of groups in defense of human rights.

Government: Fascist dictatorship. Captain Jair Bolsonaro has been the country’s president since January 2019. With the bourgeois media and money in his back, in October 2018, he won the presidential election following a malicious swearing-in campaign of his political opponents. Politically and economically, Bolsonaro is a product of the 1960’s military dictatorship in the country.