Where is Benin located on the map? Benin is an independent nation located in Western Africa. Check out the following images to see location of Benin on maps. 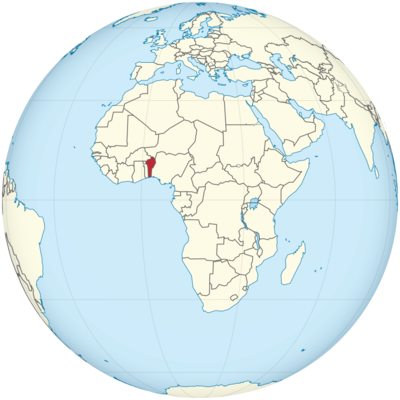 Benin is in the west of Africa. In the south the country borders on the Atlantic Ocean, which is called the Gulf of Guinea here. The stretch of sea off Benin’s coast is called the Bay of Benin. The land is long and narrow in the south and then widens. It might look a bit like a broccoli head or a flower.

In the west, Benin borders Togo. In the north there are borders with Burkina Faso and Niger. In the east there is a long border with Nigeria. If you want to drive from the north to the coast, you have to cover 650 kilometers. The largest extension from west to east is 320 kilometers, in the south, however, only 120 kilometers.

Benin is in West Africa. The map shows you exactly where.

On the coast there are many lagoons, which are shallow lakes that have been separated from the sea. River valleys, swamps and lakes also make the area very rich in water. The capital Porto Novo is also here.

To the north there is a plain on which agriculture is carried out. The landscape is a mixture of forest and savanna, which stretches in a band from Senegal to Nigeria. In Benin this landscape begins behind the coast and extends further north than in the neighboring countries (Dahomey Depression).

The longest river flows from north to south and is called Ouémé. It has many tributaries. In the northeast, the Niger River forms the border with the country of Niger over a long stretch.

Benin is located in the tropics and the climate is tropical and humid. The Sahara lies north of Benin and the equator runs south of the country. The Dahomey Depression is a specialty of Benin. While there are tropical rainforests to the west and east, Benin is a dry zone. There is almost no forest here. The savannah (grassland) mixed with forests is predominant.

There are two rainy seasons in the south of the country. The main rainy season lasts from April to June, the second, smaller rainy season is then in October and November. A long period of drought follows from December. It is an average of 30 degrees during the day and 23 degrees at night. And this is the case all year round!

There is only one rainy season in the center and in the northwest. It lasts from April to October with the peak in August and September. Overall, however, there is much less rain here than in the south – it is also closer to the Sahara, the great desert.

In the dry season from December onwards, the Harmattan blows from the northeast across the country. It brings a lot of desert sand and dust with it. But you can feel it more in the north of Benin than in the south.

In the northeast it is more humid than in the northwest, because the Atakora Mountains are noticeable here.