Where is Argentina located on the map? Argentina is an independent nation located in South America. Check out the following images to see location of Argentina on maps. 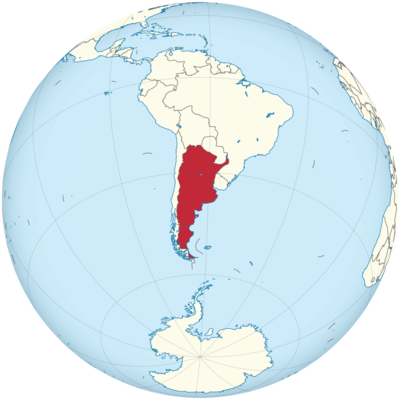 Argentina is in South America. It extends over the entire south-east of the continent and is located in the southern hemisphere of the earth. Argentina borders Chile along its entire length to the west. There are further borders with Bolivia, Paraguay, Brazil and Uruguay. So there are five neighboring countries. The southeast borders the Atlantic.

In Spanish the country is called Argentina. That is what they say: Archentina (with ch as with us in “ach”). The name is derived from the Latin word for silver ( argentum ) – because that’s what the Spaniards hoped to find here.

Argentina stretches for 3700 kilometers from north to south. You could drive across Europe, for example from Oslo to Athens, and you still would not have arrived, because that’s only 3400 kilometers…

Here you can see where Argentina is. It is drawn in dark green. In the far south, in Antarctica, there are areas that Argentina claims to have, they are marked in bright green.

From the pampas to Tierra del Fuego

The enormous north-south expansion naturally also leads to very different landscapes. In the north Argentina has a share in the Gran Chaco. This is a hot and dry plain, in which mainly thorn bushes grow. The northeast, however, is humid and swampy. The landscape here is called Mesopotamia, it lies between the Río Paraná and Río Uruguay.

In the east around the Río de la Plata lies the pampas. This is a grass steppe. In Argentina, the pampas are the heartland. There is mainly cattle breeding. Wheat is also grown here. In the pampas there is also the largest lake in the country: It is called Mar Chiquita.

Río de la Plata is the name given to the large estuary of the Río Paraná and Río Uruguay. On the South American Atlantic coast, it forms a clearly visible incision in the coast.

The Andes run to the west of Argentina. This is an elongated high mountain range. There are some very high mountains here, including the highest mountain in America: the Aconcagua at 6962 meters. In the south the Andes are getting lower. Many peaks here are covered with snow.

In the northwest, between the Andes and the Pampas, there are still the mountain ranges of the Sierras Pampeanas. Most of them are lower than 4000 meters, but there are also some high peaks here.

The southern part of South America is called Patagonia. The western part belongs to Chile, the larger eastern part to Argentina. In the north the River Colorado borders Patagonia, in the south the Strait of Magellan. Sometimes one also counts Tierra del Fuego as part of Patagonia.

Tierra del Fuego is a group of islands that form the southernmost part of the continent of South America. Argentina still has a piece of land here that is separated from the rest of its territory. The rest of Tierra del Fuego belongs to Chile. The name Tierra del Fuego derives from the many bonfires of the natives, the Magellan 1520 observed in the exploration of the later named after him Strait of Magellan.

Argentina has very different climate zones. It stays dry in the northwest. Here in the Andes there is even a high desert, the Puna. It is also dry in the Chaco. Towards the east it becomes more and more humid. The northeastern tip is subtropical. Rainforest grows here and it rains all year round.

In the northern pampas it is also rather humid. The Pampero brings rain with it, it blows from Patagonia from the southwest. The pampas are getting drier towards the southwest. To the west of the pampas are the Andes and the Andean foreland, the region is called Cuyo. Wine grows here. West winds blow in Patagonia. They rain down over the Andes. The eastern part is much drier than the western part.

Because Argentina is located in the southern hemisphere, July is the coldest month and therefore winter. The warmest month is January. In Ushuaia on Tierra del Fuego, the average maximum temperature in July is 4 degrees. In Buenos Aires, much further north, it is around 15 degrees. Further north, in Resistencia, it is 21 degrees. And in January? Ushuaia then has 14 degrees, Buenos Aires 30 degrees and Resistencia even 33 degrees!