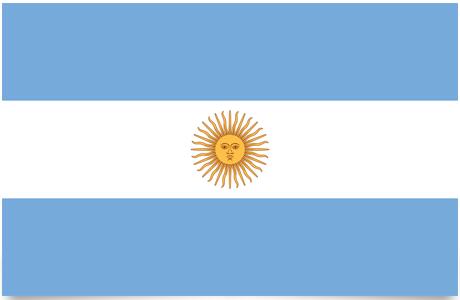 The Argentine flag arose in 1812 and then consisted of three horizontal bands, two light blue and one white. It was not until 1818 that the yellow sun in the middle was added to the flag. The blue color is said to symbolize the sky, the white clouds and the yellow sun. The sun on the flag is a copy of the first Argentine coin.

In the western part of the country, the Andes mountain range runs from south to north. At the foot of the Andes are a number of fertile irrigation-based agricultural areas. Here sugar cane and citrus fruits are grown in the north and grapes in the central parts. To the east of the Andes, the plains spread: In the north the Chacos Plain which has subtropical climate and where cotton is grown. In the country’s central region is the Pampasslet, which has fertile and deep soils, temperate climate and is characterized by sheep and cattle farming as well as the cultivation of wheat, maize, soy and hay. In the southern part is Patagonia, a gold and cold low-lying steppe plateau. It is characterized by sheep farming and the extraction of oil. Argentina also demands supremacy over Malvinas(Falkland) archipelago in the southern Atlantic off Tierra del Fuego (Fire) and north of Antarctica. The discharge of untreated sewage has exacerbated the pollution of several rivers – especially Matanza-Riachuelo in Buenos Aires. Another serious ecological problem is the rising soil erosion, especially in the northern part of the humid Pampas.

The people: The majority of the Argentine population are descendants of European emigrants – especially from Italy and Spain – who arrived in large numbers in the period 1870-1950. Among them, Latin America’s largest Jewish community. According to unofficial estimates, the original population consists of 447,300 people, divided into 15 people and 3 mixing groups. They are especially concentrated in the north and southwest of the country as well as the slums of the larger cities. The Mapuchas, Kollas and Tobas are the largest ethnic groups. The indigenous peoples in the south, east and central parts of the country are being eradicated.

Language: Spanish. A small part of the population speaks quechua, guaraní and other indigenous languages.

Government: Presidential Board. Mauricio Macri, President since December 2015. The Legislative Assembly (Congreso Nacional) is a two-chamber system consisting of the Chamber of Deputies (with 257 members) and the Senate (with 72). Each province and metropolitan area holds 3 seats in the Senate.